Australian Dollar Climbs on Retail and Trade Data Ahead of RBA

Have a question about why the Australian Dollar did what it did? Join a Q&A webinar and ask it live!

The Australian Dollar enjoyed a boost against its major peers during early Tuesday’s session ahead of December’s RBA rate announcement. The culprit seemed to be October’s retail sales beat. Australia saw consumer retail spending up 0.5% m/m versus 0.3% expected. This was the fastest pace of growth since May which was 5 months ago.

Simultaneously, we had some trade data cross the wires. In the third quarter, Australia’s current account balance clocked in at –A$9.1b versus –A$9.0b expected. This is a smaller deficit than from second quarter’s –A$9.7b measurement. Similar to the trade balance, the current account adds net income from abroad and net current transfers. In general, a negative balance indicates that the country is a net borrower.

Speaking of the trade balance, net exports added 0.00% to GDP growth versus 0.25% expected. This means that the effect of exports and imports on growth is essentially cancelled out. With Australia’s economy relying more on consumer spending habits than trading with the world, perhaps this might explain why speculators were more excited by the sales data.

Still, there is an RBA rate decision that is due later today at 3:30 GMT. Traders taking Aussie Dollar bets ahead of this announcement might speak to which event they think is more prominent. The central bank is expected to hold rates unchanged and overnight index swaps seem to have December 2018 priced in as the next hike. 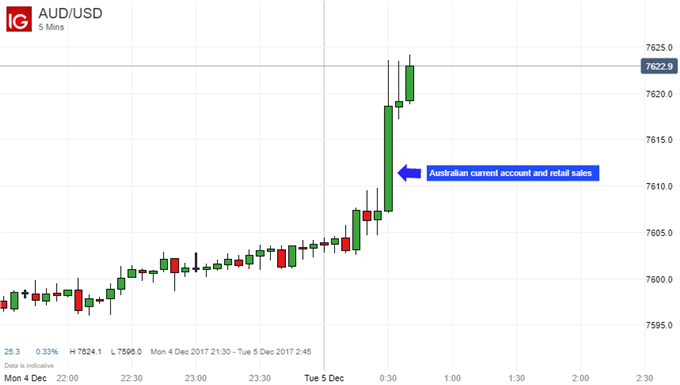 On a daily chart, AUD/USD seems to be stuck since bottoming out about two weeks ago. For one thing, the pair has broken above a falling trend line since September 20th via the formation of another morning star. Keep in mind, such a pattern doesn’t necessarily indicate that a reversal is imminent. Simultaneously, the most recent high was unable to pierce through a rising trend line dating back to late December 2016.

If Aussie Dollar chooses to continue higher or lower, there are a couple of obstacles. Starting with the former, in addition to the rising trend line, AUD/USD faces retesting former support now resistance around 0.7640. A push above that will put the 38.2% Fibonacci retracement at 0.7759 in sight. 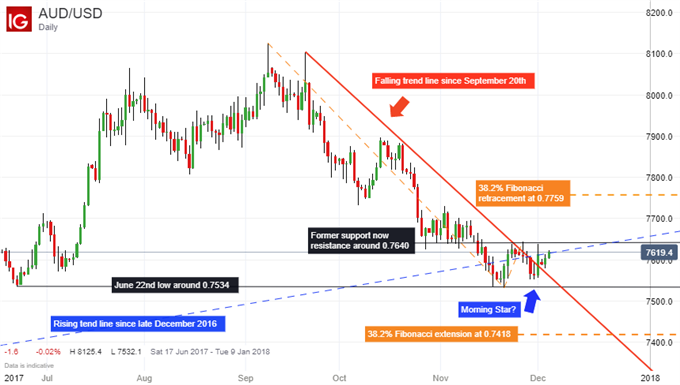