Pressured Australian Dollar No Worse Off After Caixin PMI Miss

Get trading hints and join us live and interactive for all the major economic data at the DailyFX webinars.

The Australian Dollar showed little reaction Friday to news that China’s private manufacturing sector expanded in November at its slowest pace since July.

The Caixin Purchasing Managers Index came in at 50.8, just below the 50.9 expected and October’s 51.0. When it comes to any PMI, a reading above 50 is good news for the sector under surveillance as it signifies expansion over the survey period. Obviously, this version remains above that crucial line, but it is perhaps getting uncomfortably close to it. Caixin said that confidence was at its weakest since early 2012, with firms fearing stricter environmental policy from Beijing as well as relatively subdued demand.

The measure covers smaller, private firms rather than the large, often state-linked entities surveyed by the official PMI. That was released on Thursday and showed both the manufacturing and service sectors in much better health.

The Australian Dollar reacted to the official release with gains but its response to the Caixin has been far more muted. Chinese growth seems to have retreated somewhat from the highs of the year, but the economy probably remains on track to hit Beijing’s official target for 2017 of annualised growth above 6.5%. However, it’s surely worth bearing in mind that 6.5% growth would be close to a thirty-year low for the world’s second-largest national economy. 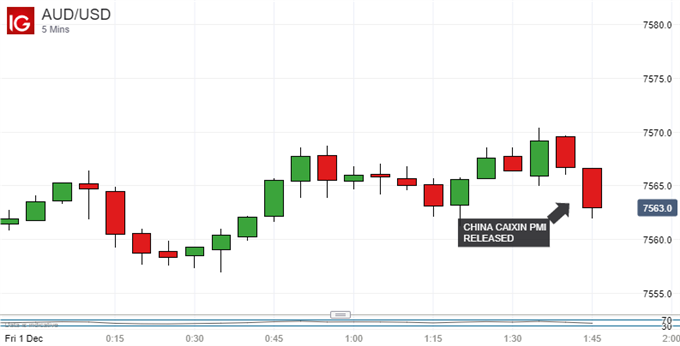 On its daily chart the Australian currency remains caught in a long downtrend from 2017’s highs. The expected December US interest-rate increase is set to see the Aussie’s yield advantage over the US Dollar consigned to history at last, and the prospect of more in 2018, while Australian rates languish at record lows, suggest that it won’t be a very happy new year for Aussie bulls.

Admittedly the Australian economy is not performing badly by many yardsticks, especially when it comes to job creation. However, wage inflation and retail sales are weak, while an elevated housing market and an indebted consumer base are seen as constraining the central bank when it comes to higher rates. 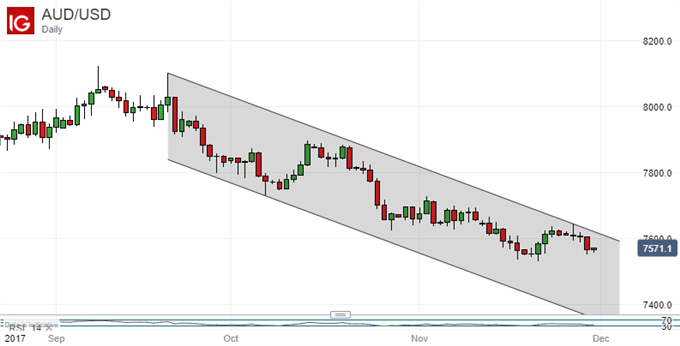 Next week will see two “big ticket” Australian domestic events. The first will be the Reserve Bank of Australia’s final monetary policy decision for 2017. No change to record-low 1.50% Official Cash Rate is expected but it will be interesting to see whether the RBA refers to current, rather distant futures market pricing as to when a move will come. No increase is currently priced in until 2019.

The other likely showstopper is official third-quarter Gross Domestic Product data, due on Wednesday. The Aussie could of course gain on any strength here but the split between domestic and export demand will be critical in the longer term. The RBA wants to see a lot more of the latter before it can think about increasing rates.