Just getting started in the NZD/USD trading world? Our beginners’ guide is here to help

The New Zealand Dollar meandered lower Wednesday after emollient parliamentary testimony on the local housing market from its central bank acting governor. Its recent bounce against the US Dollar was very much intact though.

Powerful price rises in property hotspots such as Auckland and Wellington have left some forecasters worried about a swift reversal, but Grant Spencer said he saw no reason for the housing market to “tank.”

Spencer is the Acting Governor of the Reserve Bank of New Zealand. He will remain on post until a Governor is appointed in early 2018. He pointed to the current shortage of houses for owner occupiers, and said that he does not see a collapse in housing prices as a high risk.

The RBNZ has acted to cool the market in the past, by introducing loan-leverage limits on mortgages, and Spencer said he did not yet know when lending limits might be fully removed. He expects that the government’s ‘Kiwibuild’ programme will supply 5,000 extra houses every year.

There was little here for NZD investors, it seems, and NZD/USD didn’t move much on his words. It drifted lower possibly because there was nothing remotely “hawkish” in his testimony. But the market is for the moment overwhelmingly focused on the US in any case. An interest-rate increase is expected from the Federal Reserve next month, and markets are keen to see if the Fed’s prognosis of three more in 2018 remains intact. Investors are also keenly watching tax reform’s tortured Congressional progress. New Zealand’s Official Cash Rate by contrast remains at its 1.75% record low and is thought unlikely to move anytime soon.

Still, NZD/USD has broken out of the strong downtrend seen in the last couple of months. This followed New Zealand’s inconclusive election and the political wrangling since as a new coalition was formed. NZD/USD has bounced in the 0.6780 region which seems to be holding the bears for now. 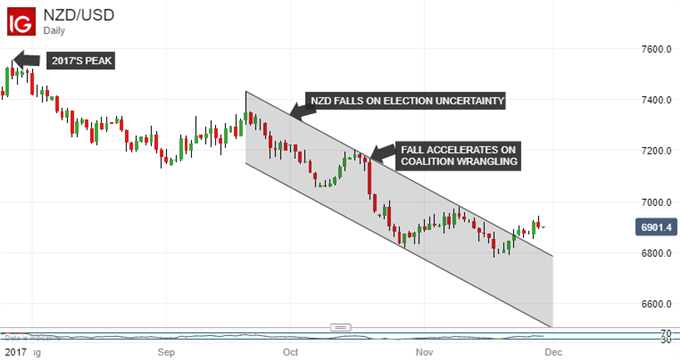 However, the new government is thought to be keen on adding an employment mandate to the RBNZ’s current inflation target. The current position demands that the central bank mandate future, average consumer price inflation near 2%, keeping it between 1% and 3% over the medium term. If some commitment to the fullest possible employment is added that could mean interest rates stay lower than they otherwise might have, which could act to depress the Kiwi over the longer term.