Brexit Briefing: Disorderly Exit Would Cause Some Pain Says BOE

- UK banking system is resilient to deep simultaneous recessions in the UK and the global economy.

- A disorderly Brexit would cause slower growth, higher rates and weaker sterling in the short-term.

The results of the 2017 UK Bank Stress Tests show that the UK financial system is resilient and robust and able to withstand severe economic shocks, but Brexit risks remain.

“For the first time since the Bank of England launched its stress tests in 2014, no bank needs to strengthen its capital position as a result of the stress test. The 2017 stress test shows the UK banking system is resilient to deep simultaneous recessions in the UK and global economies, large falls in asset prices and a separate stress of misconduct costs.”

BOE governor Carney also warned that in the case of a disorderly Brexit, that interest rates and unemployment would rise, growth would slow and sterling would fall, all assumptions seemingly accounted for in the stress tests. Governor Carney added that a transition agreement is increasingly appreciated on both sides of the channel and that there is an increased understanding of the costs of a no-deal Brexit in Continental Europe.

Brexit watchers are currently monitoring the situation in Ireland to see if the opposition party table a vote of no confidence in the government over allegations that the Deputy Prime Minister knew of a police cover up. If a vote is tabled – expected at 20:00pm - Irish PM Leo Varadkar’s attention will be drawn to party politics and away from the Northern Ireland hard border issue which is currently causing a logjam in Brexit negotiations.

Sterling is little changed on the stress tests and is waiting for the outcome of the Irish vote. EUR/GBP has been stuck in a range for around 10-weeks as traders wait for any concrete Brexit news. Today UK PM Theresa May meets her Brexit council at No.10 to discuss the UK’s position with talk that PM May will offer the EU a divorce bill of up to GBP40 billion if certain conditions are met. 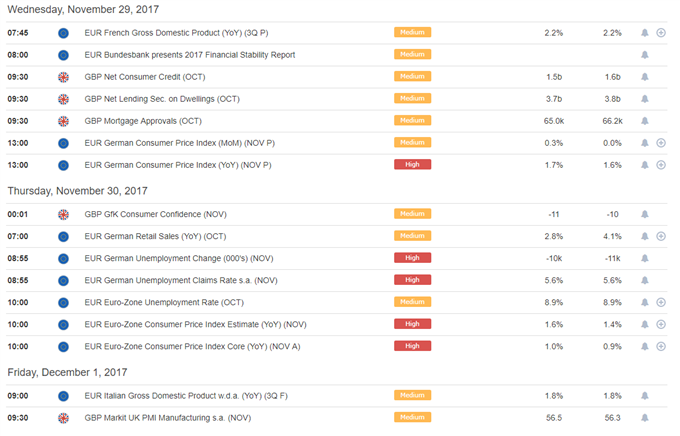 You can learn more by listening to our regular trading webinars;here’s a list of what’s coming up