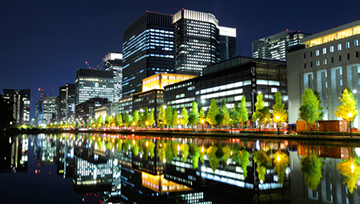 Trade the major economic data live and interactive at the DailyFX Webinars. We’d love to have you along.

The Japanese Yen was steady in a Thanksgiving-thinned market to news that its home nation’s manufacturing sector remains in rude health.

The Purchasing Managers Index for November came in at 53.8. That was the highest print since March 2014 and a full point above October’s 52.8. In the logic of PMI releases any reading above 50 signifies expansion for the sector in question.

IHS Markit which compiles the survey said that new orders increased strongly, “underpinned by business from abroad amid recent yen weakness.” However, it also noted input price inflation rising to a 35-month high thanks to that same strong Yen and rising raw-material costs. Still, this was a pretty healthy snapshot of Manufacturing Japan Inc., and adds to a steady trickle of strong numbers from the world’s third-largest national economy. It’s only a preliminary release and will be subject to revision but it does suggest that Japan’s manufacturers are heading into year-end with some vigour.

That said Japanese economic data generally has little ability to move the local currency as the Bank of Japan has repeatedly stated that monetary policy will remain extremely accommodative until consumer price inflation sustainably hits an annualised rate of 2%. At last look it was just 0.7%.

However, recent wire reports have suggested that the Tokyo authorities may be having a small rethink about this, and that stimulus could be withdrawn before inflation hits that 2% level. For the moment this remains highly speculative prospect, and the forex market certainly showed very little reaction to these data. 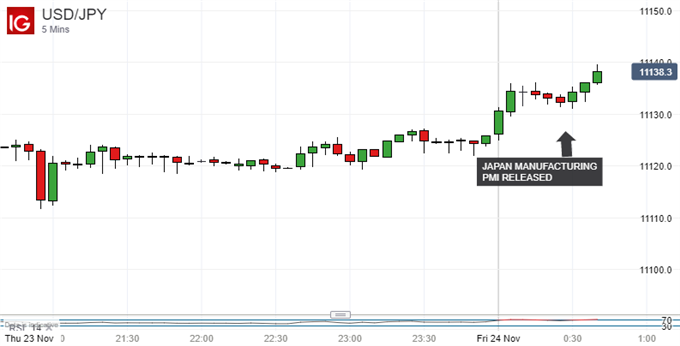 The Japanese Yen has risen against the Dollar in recent day as have many currencies. The market remains reasonably certain that the US Federal Reserve will raise interest rates in December. However, the US central bank has worried aloud about inflation’s relative torpor this week, which has investors wondering how many more rises will follow it. 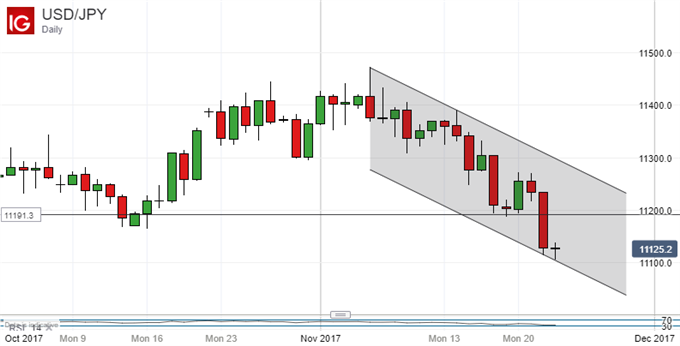 There may be a degree of pre-holiday ennui around the currency though as there remain plenty of bullish forecasts for the US economy as we head into 2018. As such it may be wise to wait until next weak for confirmation of this weak-dollar story, even though the USD/JPY downtrend clearly endures on its daily chart.