The Australian Dollar slipped Tuesday following the release of typically cautious monetary-policy meeting minutes from the Reserve Bank of Australia.

The RBA left the Official Cash Rate alone on November 7, at its record low of 1.50%. The minutes flesh out the statement made at the time and the central bank again took the chance to worry about the damaging effects of too much currency strength on the prospects for both growth and inflation.

This is a common lament from the RBA, however. It also worried about what it said was “considerable uncertainty” as to if, and when, subdued wage pressures might lift, while warning that consumption growth was likely to have been lower in the year’s third quarter.

All up this was a fairly standard set of minutes from the RBA, acknowledging Australia’s economic strength but fretting that those indicators perhaps most important to policy setting continue to underperform.

And to be sure the Australian economy is not without its bright spots. Employment growth is very strong, exports are too. However, wages, consumer prices and domestic consumption remain weak and Australians are heavily indebted.

The minutes only added to the already very widespread impression in financial markets that Australian rates are going nowhere fast, and so a knock for the Australian Dollar was unsurprising. 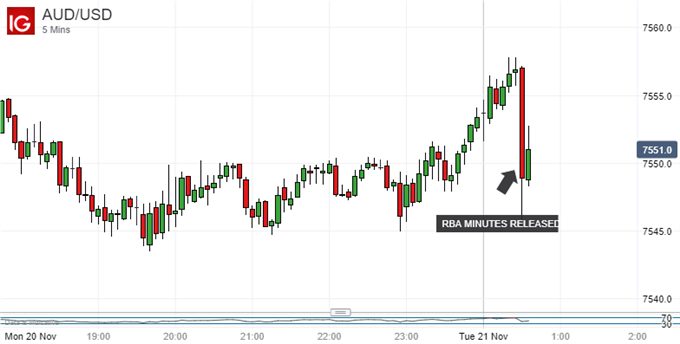 The currency remains under broad medium-term pressure. The RBA’s own apparent reluctance to tighten monetary policy was reinforced this week by the International Monetary Fund. It said on Monday that Australian interest rates could stay at their record lows for another twelve months because of inflation’s docility.

We’re at the point where one more interest rate rise in the US would see Australia’s yield premium evaporate. That hike is expected to be delivered in December and further increases would see the US Dollar on top. That, and the sense that a weaker Aussie is precisely what the RBA wants to see, are keeping the AUD/USD market weighed down. 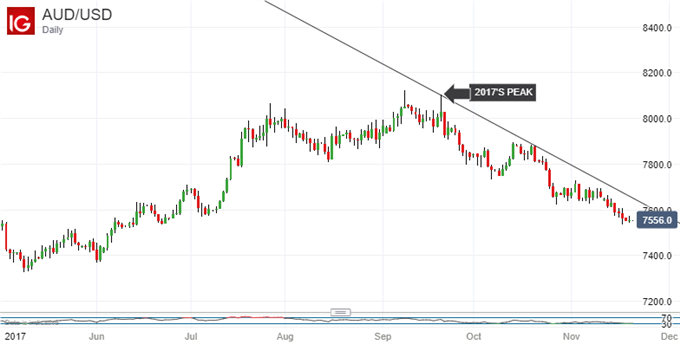 However, while the Aussie outlook remain clearly bearish some caution may well be warranted when it comes to the magnitude of further immediate falls. AUD/USD is starting to look oversold and some consolidation may now be seen, even if falls resume once it is over.