Aussie Dollar Struggles with Follow Through on Chinese Data Miss

The Australian Dollar initially did not take too kindly to weaker-than-expected Chinese retail and industrial data. Starting with the former, retail sales only rose 10.0% y/y in October versus 10.5% expected and down from 10.3% in September. This marks the weakest growth this year so far.

Not much was brighter when looking at industrial production which came out 6.2% y/y versus 6.3% expected and 6.6% prior. There weren’t any significant milestones to be noticed there. These statistics follow a trend of downside Chinese data surprises over recent months.

With China being Australia’ largest trading partner, economic news-flow from the former country often implies knock-on effects on the later, triggering a response from the currency. Even so, the Reserve Bank of Australia has signaled that is in no rush to raise rates. Perhaps this is why the Aussie Dollar soon retraced most of its losses in the aftermath of the data release.

As Market Analyst David Cottle mentioned, the big domestic economic event this week will be Australia’s official employment report. The markets will be looking for an 18.8k gain in employment with the unemployment rate holding steady at 5.5%. 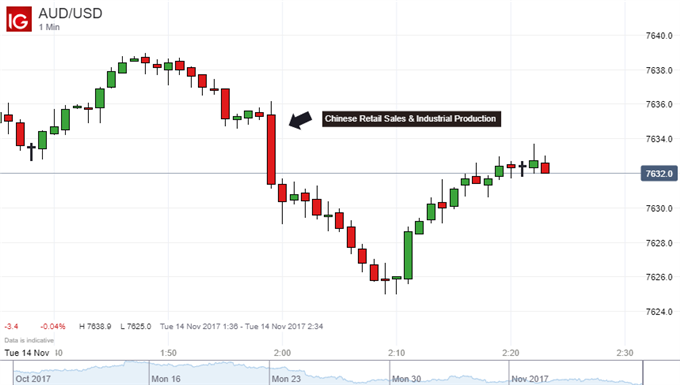 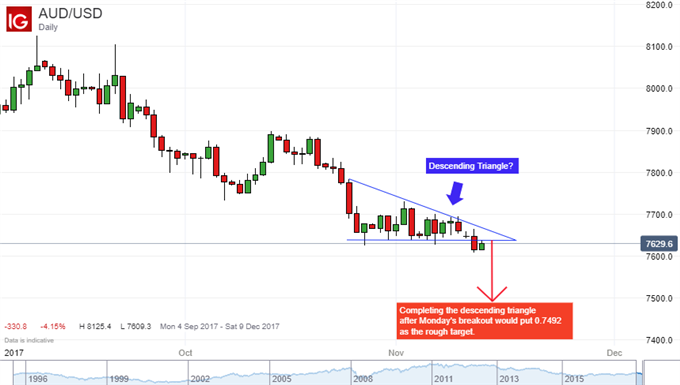 On a daily chart, AUD/USD seems to be making a move after more than two weeks of consolidation since reversing back in September. The pair appears to have broken below a descending triangle which slowly formed over the past two weeks. This puts 0.7492 as the rough target should Aussie continue heading lower, completing the formation.

If however AUD/USD changes course, the former horizontal support of the descending triangle could become new resistance. Should the Australian Dollar keep climbing against its US counterpart, the descending line of the triangle might be the next barrier.

Do keep an eye on the intraday IG client sentiment reading for AUD/USD. It now shows that traders are further net-long and that the recent changes gives a stronger bearish contrarian trading bias. This might mean AUD/USD could continue to fall.