- A period of consolidation is needed before BTC makes a new attempt at $8,000

- Ethereum breaks out of its recent sideways trading pattern.

After Wednesday’s decision to cancel the Segwit2x fork, Bitcoin went on a roller-coaster ride making a new high in excess of $7,900 before sliding all the way back down to $7,200 as sellers took control of the market. It is likely that a lot of investors had bought BTC in the run-up to the Segwit2x fork in anticipation of a free coin drop, but those hopes were dashed when the fork was cancelled. In the run-up to the decision, the supposed new coin, B2x, was soft quoted between $600 and $1,000, a figure that accounts for most of Bitcoin’s fall from its high. With the market now steadying between $7,000 and $7,200, the token will likely see a period of sideways trading before attempting a fresh push higher.

We have been discussing the upcoming Segwit2x fork and its price-moving potential, over the last couple of weeks at our Weekly Bitcoin Webinar on Wednesday’s at 12:00pm - if you would like to join us, please click here.

As the price of Bitcoin continues to hit new highs, calls for the crypto-currency ‘bubble to burst’ get louder. We have discussed before that with proper trading discipline, including the use of guaranteed stop losses, the impact of any sharp move in BTC can be controlled by traders. If you would like some more expert information about how to keep volatility under your control, please see our trading and physcology educational guides here.

While the price of Bitcoin swung initially higher then lower, a wide variety of altcoins recorded double-digit gains post the Segwit2x announcement, as investors widened their holdings of digital currencies.

The gains in these altcoins were mainly driven by overnight Korean Won (KRW) buyers and from investors switching out of Bitcoin as hopes of a new, free, B2x coin were dashed.

The second-largest crypto-currency by market capitalization, Ethereum broke out of its recent trading pattern overnight as buyers took control of the market. ETH haslagged BTC over the past months and is still around $100 short of its June 12 high of $420. The chart below shows the 78.6% Fibonacci retracement level at $333 as the next upside target ahead of the October 16 print at $350. Ethereum was also in the news yesterday after wallet provider Parity disclosed that due to an accidental individual coding error, hundreds of millions of US dollars’ worth of Ether tokens were frozen with clients unable to access them. 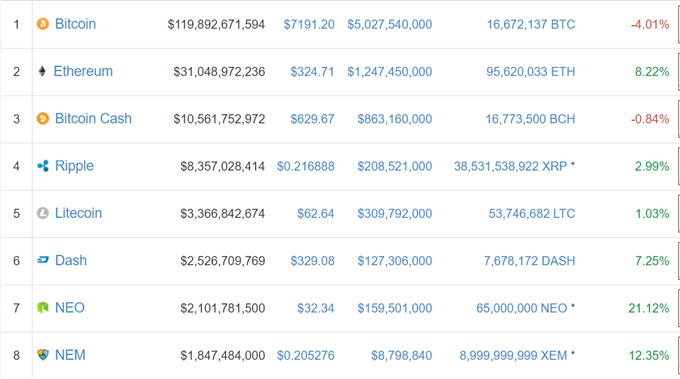 If you are interested in practice trading either BTC or ETH, you can create a Quick and Free Demo Account Here