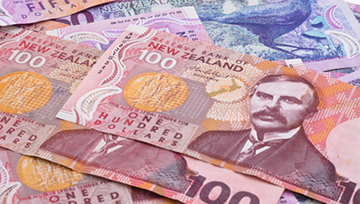 The New Zealand Dollar enjoyed a boost against its major counterparts after November’s RBNZ monetary policy announcement. Heading into the interest rate decision, the markets were not expecting the central bank to change course but, they do envision a rate increase (with 99.2% certainty) in one year. Something in today’s update certainly excited those hawkish bets. Moreover, it wasn’t just a single piece of information, but rather a handful.

Starting with their official cash rate projection, the Reserve Bank of New Zealand now envisions rates rising in the second quarter of 2019 as opposed to the previously estimated third quarter of the same year. Next, they see inflation now reaching 2 percent in Q2 2018 as opposed to in Q1 2019. Finally, GDP growth is expected to strengthen instead of maintaining at its current pace.

In their projections, the bank has incorporated preliminary estimates of the impact of the new government’s policies. These include increases to the minimum wage, additional spending and tighter visa requirements. RBNZ’s Governor Grant Spencer, who spoke shortly after the interest rate announcement, said that these policies will add about 0.5% to GDP each year. However, the central bank said that the impact remains very uncertain.

Let’s not forget that at the end of the statement, the Reserve Bank of New Zealand reiterated that monetary policy will remain accommodative for a considerable period. In addition, numerous uncertainties remain and policy may need to adjust accordingly. In addition, the bank’s projection for a rate increase still remains ahead of market expectations which does leaves room for policy adjustment bets should things turn sour.

Additional comments/notes from the RBNZ: 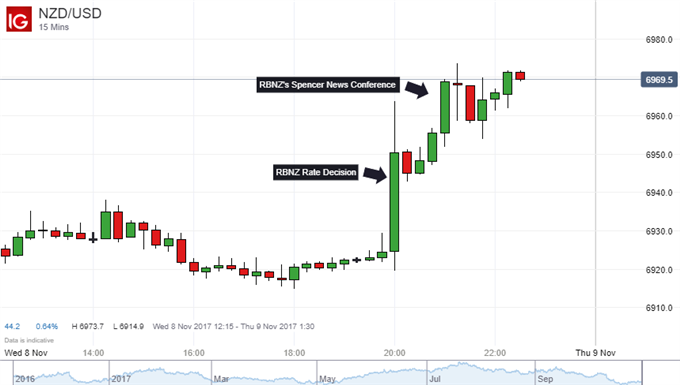 Following the RBNZ interest rate announcement, NZD/USD closed at its highest level since October 24th, just above a 2-week high. It remains below a resistance line going back to September 20th. The pair has been slowly climbing higher ever since hitting the May 10th and 2017 low back on October 27th. 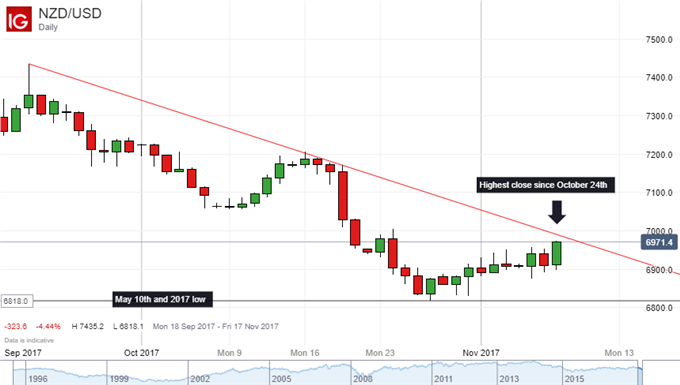