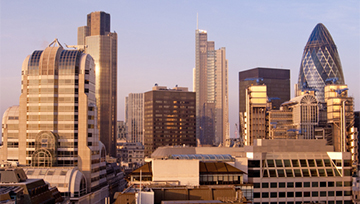 - The purchasing managers’ index for the UK’s dominant service sector rose to 55.6 in October from 53.6 the month before.

- That suggests a brighter picture for economic growth but does not change the belief that there will be no more rate rise for some time and that the British Pound could weaken again as Brexit concerns mount.

The purchasing managers’ index for the UK service sector rose unexpectedly to 55.6 in October from 53.6 in September. A drop to 53.3 had been predicted. However, that does little to ease worries about the weakness of the British economy even though an index above 50 signals continuing expansion.

The latest figure is therefore unlikely to change the current market view that after Thursday’s increase in UK Bank Rate to 0.5% from 0.25% any further rate rises are unlikely for some time. This in turn suggests that the British Pound could extend the losses seen after the rate hike, particularly if the Brexit negotiations between the UK and the EU continue to show little progress.

IHS Markit, which compiles the data, noted that October’s figure showed the strongest rate of business activity growth since April, It pointed to a “marked and accelerated rise in service sector output”, with the growth of new work rebounding from September’s recent low and input cost inflation easing to its weakest for 13 months.

For more, listen in to tomorrow’s webinar hosted by DailyFX’s Nick Cawley at 1130 GMT: UK Markets Look Ahead – Will GBP Dance to Brexit’s Tune Again?

“Service providers also revealed a positive development in terms of operating expenses as the rate of input cost inflation eased to its lowest since September 2016. However, the rate of job creation slipped to a seven-month low and confidence towards growth prospects remained muted. Fragile sentiment regarding the year ahead business outlook was linked to entrenched economic uncertainty and worries about business investment among clients,” it added.

The all-sector PMI rose to 55.3 in October from 53.3 the month before, also its highest since April, and IHS Markit said the data point to GDP growing at a quarterly rate of 0.5%, up from 0.4% in the third quarter.