An Australian Dollar market fixated like all others on the US Federal Reserve Wednesday didn’t respond much to an as-expected survey of China’s manufacturing sector.

The Caixin Purchasing Managers Index for October came in at 51, exactly matching September’s. Any reading above 50 in a PMI survey signifies expansion for the sector in question. This version has been stuck around the 51 handle for the past twelve months, suggesting measurable but hardly stellar growth for the medium-sized firms surveyed.

This data act as a counterpart to the official manufacturing PMI which covers the larger, often state-run concerns. It was released on Tuesday and, while growth there missed expectations, it remained well within the year’s trend.

China is heading into year-end in reasonable economic shape overall, with its official Gross Domestic Product growth target of 6.5% eminently achievable. However, growth rates slowed to quarter-century lows in 2015 and 2016 and even on-target gains this year won’t change that pattern.

The Australian Dollar nudged up against its US cousin after the release. The currency can often act as a China proxy thanks to its home nation’s strong raw-material export links with the world’s second-largest economy. But Asia-Pacific markets were subdued before Wednesday’s US monetary-policy decision which will come long after they close and moves were predictably small for an on-target piece of data. 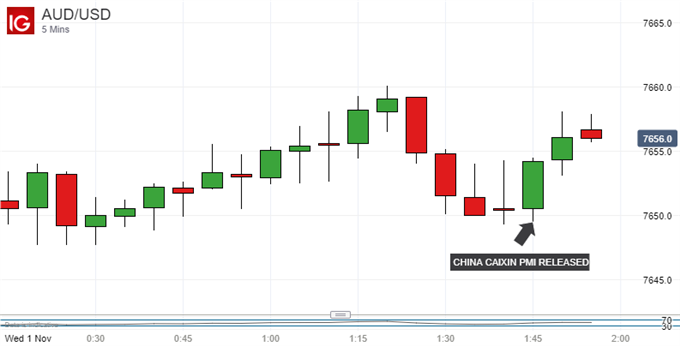 From the broader perspective of its daily chart, the Aussie remains on the ropes against its US counterpart. The contrast between of a US Federal Reserve keen to raise interest and a Reserve Bank of Australia not about to do the same anytime soon have weighed on AUD/USD. 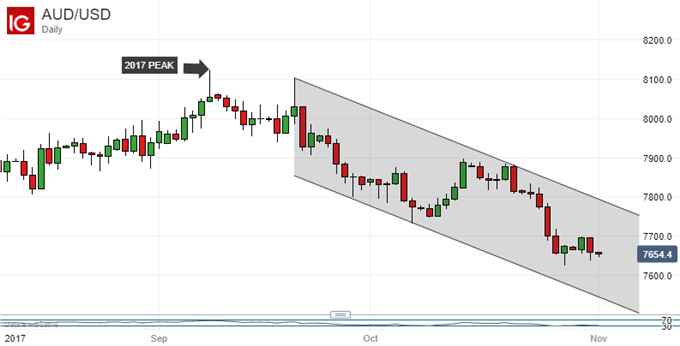 Once the Fed decision is out of the way the Australian Dollar market won’t have long to wait until it hears from the RBA. It will give its November monetary policy call on November 7, when the Official Cash Rate is universally expected to remain at its 1.50% record low. Futures markets don’t price in an increase until well into 2018.