The Australian Dollar was steady Tuesday despite a weaker-than-expected snapshot of China’s manufacturing sector.

The official October Purchasing Managers Index came in at 51.6, below both September’s 52.4 and the expected 52.0. In any PMI survey a reading above the 50 level signifies expansion. September’s print is starting to look like a bit of a bullish outlier with the latest data merely a return to the 51 handle which has characterised this release for much of 2017.

The survey covers China’s larger manufacturers which often have significant state involvement and suggests that expansion continues at a modest pace which may prove more sustainable than previous, stronger periods of gains.

After the release newswires reported that a weaker property market and tighter pollution rules are forcing many steel mills, smelters and factories to curtail production but that strength elsewhere – notably in exports – has seen China’s economy overall post better than expected growth in 2017’s first nine months.

The service sector also saw a slower pace of acceleration in October. The non-manufacturing PMI came in at 54.3, below September’s 55.4.

The Australian Dollar can act as a liquid China proxy thanks to its home nation’s strong raw-material export links with the world’s second-largest economy. However, it did not obviously do so in these numbers’ case with AUD/USD barely moved by the release.

On its daily chart, however, the Aussie remains in broad retreat against its US counterpart from the year’s highs which were made in September. The prognosis of a US Federal Reserve keen to raise interest rates if the data allow it and a Reserve Bank of Australia apparently far more reticent to do the same have weighed on AUD/USD. The RBA is also uneasy about what it sees as excessive currency strength, and the currency is vulnerable whenever that unease its expressed - as it often is. 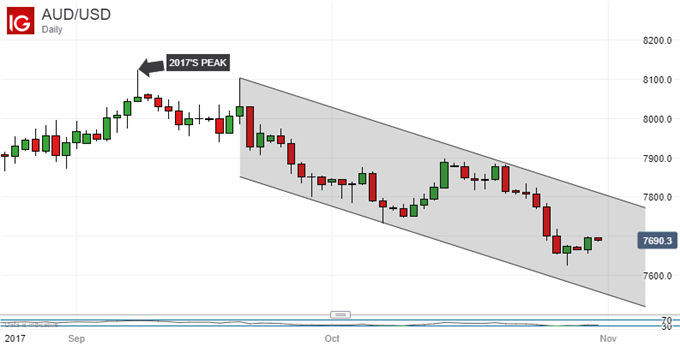 The market awaits monetary policy decisions from the US Federal Reserve on Wednesday and from the RBA on November 7 and AUDUSD may be a little stuck until investors have heard from both.