The year’s final quarter is well under way and the DailyFX forecasts are out. Have a look here.

A Japanese Yen market focused on politics and interest-rate differentials had little time Tuesday for news of a modest slip-back for its home country’s manufacturing sector.

October’s Purchasing Managers Index came in at 52.5. That was lower than September’s 52.9 but only by a whisker and in any case last month’s print had been a four-month high. In the logic of PMI releases, any reading above 50 signifies expansion. However, the details were a little more gloomy. Business confidence hit an 11-month low and the output sub-index fell.

Nikkei produces the PMI with UK-based analytics firm Markit. Looking at the data, Markit said that the sector was still “improving solidly” even if it appeared to have lost some momentum. Worryingly for policy makers in Tokyo, who’d dearly like to see some more pricing power in the economy, it seems that firms are continuing to absorb cost pressures. Output price inflation was “only marginal again” in October, Markit said.

Still, the Japanese Yen remained in thrall to Monday’s election result which saw incumbent Prime Minister Shinzo Abe comfortably back in power. This will mean an extension for his ‘Abenomics’ reform program, and a fillip for its monetary leg, which involves super-easy policy. While this is clearly a recipe for local stock gains – the Nikkei 225 index has enjoyed a 14-session winning streak- it’s not so great for Yen bulls.

USD/JPY has steadied since the election news saw it gain. But there was little movement after the PMI numbers. 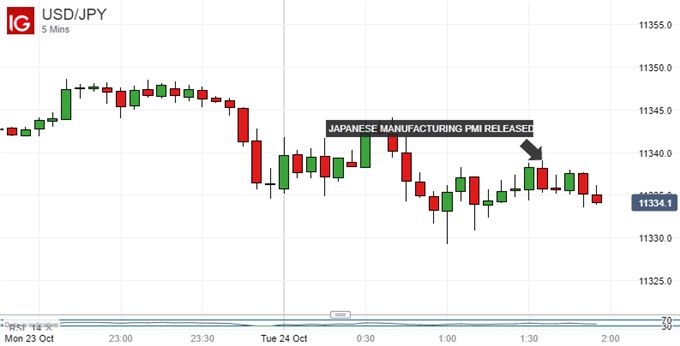 On its daily chart, USD/JPY remains well within the clear uptrend channel from September’s lows. However, the greenback seems at the moment to be losing a little momentum just short of previous significant highs made just above the 114 handle back in July. It could soon be time for Dollar bulls to show some resolve. 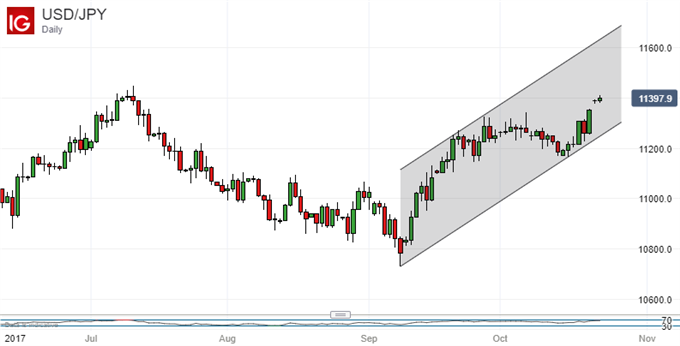