The Japanese Yen weakened Monday as it became clear that its homeland’s incumbent Prime Minister Shinzo Abe had won a convincing victory in last weekend’s election.

Abe called the snap vote back in late September, reportedly in response to a lift in his battered approval ratings in the wake of North Korea’s nuclear brinkmanship. Now that seems like a master stroke as Abe looks to have been returned with his comfortable majority intact, potentially seeing him in power until at least 2021.

However, his return was always likely to weigh on the Yen as it means the continuation of the economic revival plan named ‘Abenomics’ after him. This will see either the continuation of Bank of Japan Governor Haruhiko Kuroda’s time at the helm when his term expires next year, or the appointment of a close disciple. This suggests – indeed, all-but ensures – that Japanese monetary policy will remain ultra-loose until Consumer Price Index inflation hits an annualised rate of 2% and stays there.

The most recent data were August’s. They showed that rate at 0.7%. That was the highest point since March 2015 but still obviously way below the BoJ’s target. So current miserable, Yen-strangling low onshore Japanese yields will remain the status quo for months ahead and possibly years.

With that in mind it’s little wonder that the Yen should fall, especially against a US Dollar currently buoyed up by the idea that the US Federal Reserve will both continue raising interest rates and, crucially, unwind its vast, crisis-bloated balance sheet. The contrast with a BoJ still offering negative rates and swelling its own sheet could hardly be greater. 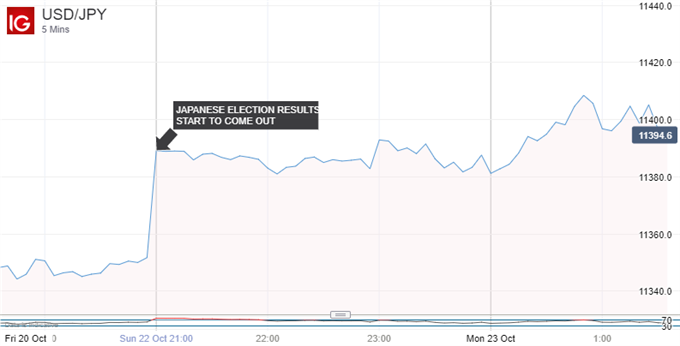 Having bossed the US Dollar for much of this year the Yen remains in trouble, as it has been since USD/JPY turned more bullish in early September. After stalling in recent weeks, the greenback’s uptrend appears to have resumed aided by an election result which has brought more Yen bears out of the Asian-market woods. 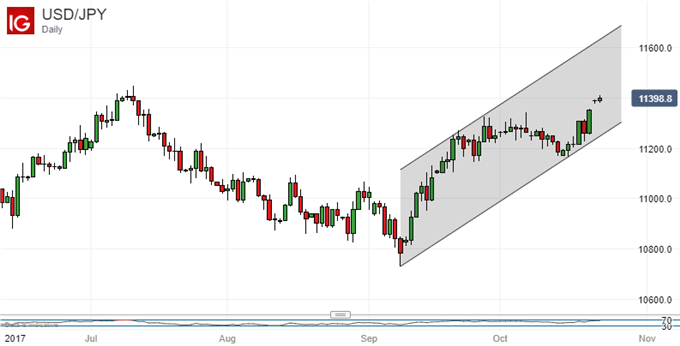 On the political front the most eye-catching piece of legislation a new Abe government will pursue is its long-held ambition to amend Japan’s pacifist, post-war constitution to regain the country’s right to make war. This is a response both North Korean belligerence and China’s burgeoning Pacific military ambitions.

However, the potential ramifications of this are matters for the future as far as Monday’s foreign exchange markets are concerned.