- Bitcoin building steam for the next upward move.

After failing at its first attempt to break above $6,000 at the end of last week, Bitcoin is currently gaining upward momentum and looks set to attempt to make a new all-time high in the short- to medium-term., as the Bitcoin Gold hard-fork approaches. The split is expected to occur on October 25, and like the recent Bitcoin Cash hard-fork is likely to see holders of Bitcoin being given free Bitcoin Gold tokens on a 1:1 basis. Note that traders who were short of Bitcoin ahead of the Bitcoin Cash split were liable for the new coins, also on a 1:1 basis. The current price move is now supported by the WMA at just over $5,610 with further support from the upward trend line around $5,580.

Care should still be taken ahead of the SegWit2x hard-fork which is scheduled for mid-November.

Ether (ETH) the second-largest digital coin by market capitalization, saw its fifth hard-fork ebnacted over the weekend with markets reporting no disturbance. The successful Byzantium fork, part of the Metropolis upgrade, was expected to pass with minimal problems and has helped underpin the recent ETH rally, aided also in part by a firm digital currency backdrop. The coin broke the 0.786% Fibonacci retracement level at $333 and looks set to make a fresh attempt at September’s high, just short of $400.

IBM today announced that it would partner with Stellar (STR) and KlickEx Group to provide a new blockchain banking solution designed to reduce costs and settlement time for global payments for consumers and businesses. The announcement sent Stellar Lumens price up in excess of 135%, making it the largest mover on the day. 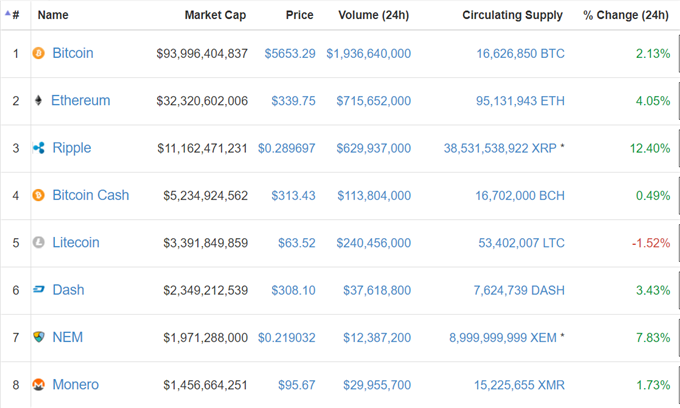