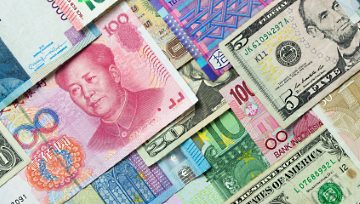 Trade the major economic data live and interactive at the DailyFX Webinars. Join up and join us, we’d love to have you along.

The Australian Dollar didn’t make much of some Chinese inflation numbers which came in broadly as expected on Monday.

The official Consumer Price Index rose by 1.6% on the year in September. That was down from August’s 1.8% rise but bang in line with market expectations. Factory gate prices had a bit more vigor, with the Producer Price Index up 6.9%, some way above the forecast 6.4% rise. The signs are that domestic demand remains strong which is helping those firms which have survived China’s rationalisation of many industries raise prices.

Credit growth also remains healthy. All up this was another reasonably strong set of data from the world’s second-largest economy, although it probably isn’t quite enough to banish the sustainability doubts sown by last week’s rather weaker service sector snapshot. Still, for now that remains a solitary cloud on China’s horizon and policy makers may be justified in feelling at least moderately pleased with themselves as they gather in Beijing for this week’s Communist Party National Congress.

The figures weren’t enough to move the Australian Dollar though. Chinese data can often shift it, thanks to its home nation’s strong raw material export links to China. However, the AUD market may well be more focused on domestic reports coming up later in the week, notably official employment stats which see daylight Thursday.

The Aussie had been under a bit of pressure in recent months as the contrast between an activist Federal Reserve- still keen to raise rates if it can- and an Australian central bank in no obvious hurry to follow suit took the shine from AUD/USD. The Reserve Bank of Australia has also tried talking it down again, worrying aloud about the nasty effects of too much currency strngth.

However, some strong Australian consumer confidence numbers and a rise in infaltion expectations saw AUD/USD rise last week. Good news from the job market on later this week could see those gains underpinned.