Find out what the retail foreign exchange community makes of the Japanese Yen right now at the DailyFX Sentiment Page.

The Japanese Yen was steady Thursday as official factory-gate pricing data came in as expected.

The Corporate Goods Price Index rose by 0.3% on the month in September, for an annualized gain of 3%, both of which matched median analyst forecasts. The index has been heading higher pretty solidly for about a year now. However, consumer prices are obviously more important in terms of Bank of Japan policy forecasting and they have been far more stubbornly low over the same timeframe, which probably accounts for the somewhat muted reaction to these numbers from the USD/JPY market. 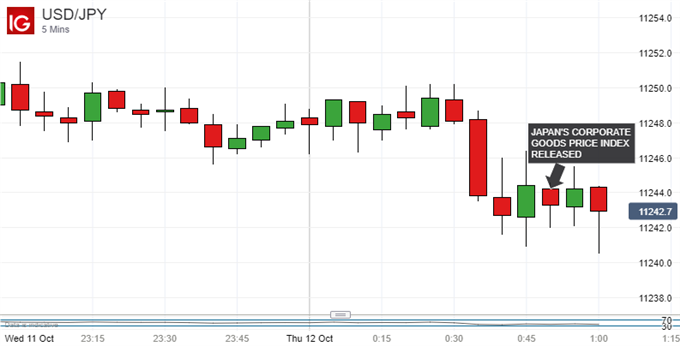 The Yen did strengthen a little bit, as well it might have, arguably. Both consumer and producer prices are at least heading higher together now, as the BoJ would like, if at a rather glacial pace in the former’s case.

At any rate inflation numbers remain just about the only domestic data with any chance of driving the Yen. BoJ Governor Haruhiko Kuroda this week recommitted the central bank to extreme monetary accommodation until annualised consumer price inflation “overshoots” its 2% target. That target has not been hit for two years and, despite trillions of Yen already expended in efforts to get prices going, inflation was running at 0.7% in August.

The Japanese Yen has been under pressure against the US Dollar since early September, as interest-rate differentials and hopes for stimulative tax policy underpin the greenback. However, USD/JPY broke out of a sharp uptrend channel two weeks ago. For the moment its torpor since looks consolidative and there’s little reason to suspect a substantive fightback from the Japanese currency. However, if Dollar bulls are going to push the pair higher, they are certainly taking their time.

Support at late September’s low of 111.48 seems to be underpinning the pair on its daily chart. 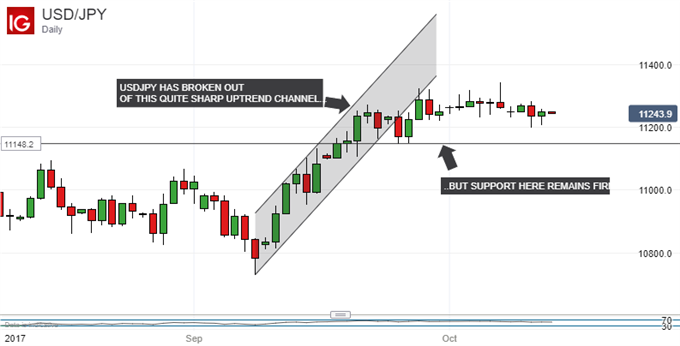