- While many Fed officials agreed that it was time for another rate hike in the coming months, many issued concern that low inflation wasn't a temporary phenomenon.

- At the September FOMC meeting, the Fed outlined plans for raising rates again in December, as well as three times next year.

- The DXY Index, already down on the day, slipped back towards its lows amid a four-day losing streak.

The US Dollar is back near the lows of the day during its four-day losing streak after the Federal Reserve’s September meeting policy minutes revealed deeper concerns about persistently low inflation.

While some officials believed that there were still upside risks to inflation as a result of the tight jobs market, there was a prevailing belief among many FOMC policymakers that recently low inflation was not simply transitory. Implicitly, if policymakers believe that inflation will stay lower for longer, than they will be less inclined to stay committed to their current prescribed glide path of interest rates (which, as seen since the start of the Fed’s hike cycle in December 2015, has been a persistent source of sabotage for greenback rallies).

In sum, today’s minutes can be seen as neither more hawkish nor more dovish than what markets were pricing in ahead of time, given the outlook for another hike this year; Fed funds were pricing in a 77% chance of a 25-bps rate hike in December after the minutes were released, just as they were beforehand. 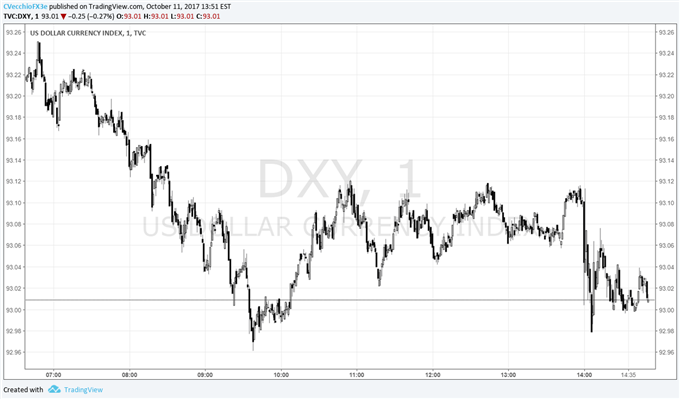 Immediately following the release, the US Dollar slipped back versus the Euro and the Japanese Yen, with the Dollar Index (DXY) falling from 91.62 ahead of the FOMC decision to as high as 92.52. DXY Index was trading at 92.50 at the time this report was written.