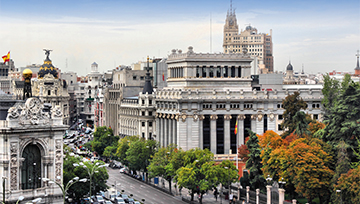 - Spanish PM Rajoy has taken the upper hand in the central government’s quest to defeat plans for Catalan independence.

- That’s boosted the Euro, as well as Spanish stocks and government bonds.

Spanish Prime Minister Mariano Rajoy took advantage Wednesday of the previous evening’s fudged declaration of independence by the country’s Catalan region, boosting the Euro against other currencies and lifting the prices of Spanish stocks and government bonds.

Late Tuesday, Catalan President Carles Puigdemont declared independence after a disputed referendum in the region gave him a mandate but immediately suspended it and called for talks with the central government in Madrid, enraging some of his allies and supporters. That gave Rajoy the upper hand, enabling him to ask Puigdemont whether he was declaring independence or not.

If the answer is yes, he is likely to invoke Article 155 of the Spanish constitution, enabling Madrid to suspend Catalonia’s political autonomy. If the answer is no, Puigdemont is likely to see his regional government fragment. Either way, the markets will likely see this as a victory for Madrid over Barcelona, the Catalan capital, and they moved accordingly Wednesday.

The yield on benchmark Spanish 10-year sovereign bonds fell by 3.5 basis points to 1.664%, their spread over 10-year German bunds narrowed to 120.7 bps and the IBEX 35 Spanish stock-market index climbed by 1.3% to 10,271. Spanish five-year credit default swaps, which measure the cost of insuring against a default, fell back, while in the currency markets, EUR/USD continued to rally, extending its recent advance.

Looking ahead, further gains for the Euro and Spanish assets are likely if the feeling grows that the crisis has been defused. However, if Madrid imposes direct rule on Catalonia that could lead to further protests on the streets of Barcelona and to renewed declines in Spanish stocks and bonds.

For the Euro, the key question is whether the Spanish constitutional crisis will persuade the European Central Bank to delay plans to tighten monetary policy in the New Year – but for now that seems highly unlikely.