Just getting started in the Japanese Yen trading world? Our beginners’ guide is here to help.

The Japanese Yen weakened against the US Dollar Tuesday on yet another recommitment to ultra-loose monetary policy from Bank of Japan Governor Haruhiko Kuroda.

Speaking at a meeting of BoJ branch managers, Kuroda said that the BoJ would expand the already enormous domestic monetary base until annualized consumer price inflation “overshoots” 2%. This target has not been hit since 2015 and, with inflation running at 0.7% currently, Kuroda’s words imply perhaps years of extreme monetary accommodation ahead. Don’t forget Japan currently has negative base rates, direct management of its own government bond yield curve and a huge bond-buying program in place.

Kuroda said that the economy was expanding moderately and that the BoJ expects the Consumer Price Index to pick up pace toward that 2% goal.

There was nothing new here for the Japanese Yen. Kuroda has been a staunch defender of monetary easing for years now. He’s been equally staunch in his public belief that the inflation target is attainable, even if some business surveys suggest that executives disagree with him. Still, mention of a CPI overshoot was an unusually forthright defence of current policy so it’s perhaps unsurprising that the Yen should have slipped as it did. 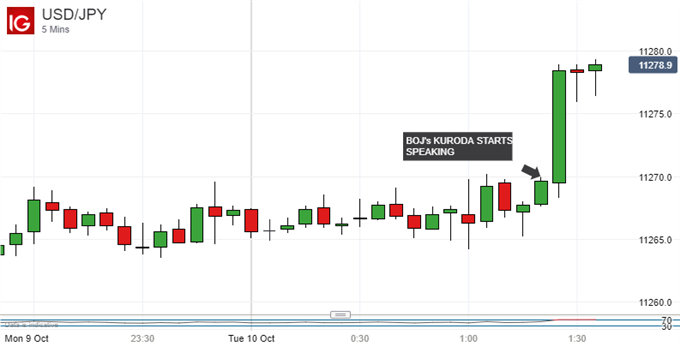 Having had things their own way for much of the year, Yen bulls are now on the defensive as interest-rate differentials support the US Dollar against the Japanese unit. However, USD/JPY has broken below a notable uptrend channel in place since September 8’s lows. For the moment that break looks understandably consolidative- a pause for breath was surely in order- and near-term support clusters look firm. 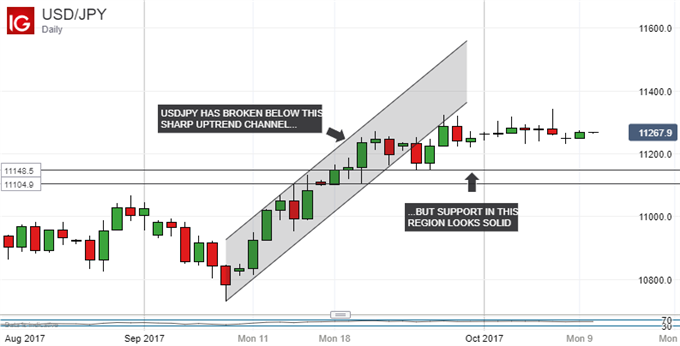 That said USD/JPY has yet to top the previous significant peak (July 11’s 114.48) and, until it does, the year’s pervasive downtrend remains in place.