The Australian Dollar took a hit Monday when a key indicator of Chinese activity made a 21-month low.

September’s service sector Purchasing Managers Index of China’s private sector concerns came in at 50.6, well below August’s 52.0. That put the composite PMI, which adds on the already-released manufacturing version, at 51.4 - a three-month low.

Caixin’s manufacturing PMI was released on September 30 and showed a slight pullback, to 51.0 from August’s six-month peak of 51.6. However the month’s official PMI data, which cover the larger state-run enterprises, were more upbeat. There manufacturing output was at highs not seen for five years.

PMI surveys are structured so that any reading above 50 signifies output expansion for the sector in question. In China’s case the markets possibly put a little more weight on the private numbers. It certainly seemed so Monday as AUD/USD slipped. The Australian Dollar can act as the markets’ favorite liquid China proxy given its home nation’s strong raw-material export links with the world’s second-largest national economy.

The latest data speak to market worries that, while China has performed reasonably well this year, it will be difficult for it to sustain that performance as Beijing tries to rein in rampant corporate debt. The People’s Bank of China lowered its bank-reserve requirements in September. This allows certain banks to lend more, possibly in a backhanded admission than credit conditions may now be too tight.

On its daily chart the Australian Dollar remains in a steep downtrend from September 20’s intraday peak, and a shallower one from 2017’s high of 8123 reached on September 8. Perceived interest rate differentials are proving a fundamental weight on the AUD/USD pair. The Australian central bank’s public commentary does not suggest an outfit in any hurry to lift its record-low 1.50% cash rate. Indeed policy board member Ian Harper last week refused to rule out still-lower rates if consumption falters- although that is not the market’s expectation. 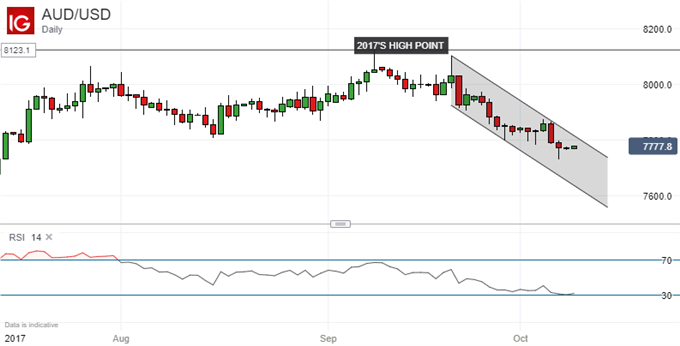 That said the pair’s Relative Strength Index is veering toward oversold territory and a little respite for the Aussie may be due, even if the bulls’ difficulties are likely to endure.