The Japanese Yen was lower against the US Dollar Friday following the release of some widely varying earnings data.

Labour cash earnings rose a chunky 0.9% on the year in August, according to official figures. That was the strongest rise since July 2016 and well above both the 0.9% expected and July’s 0.6% slide. However, the broader measure of real cash earnings rose just 0.1% on the year. That was slightly better than expected but the previous month’s data were revised sharply, down show to a 1.1% fall.

Overtime pay and base wages rose, but not by much. Still, the numbers appear broadly to be heading in a direction which the Bank of Japan would like and USD/JPY’s little spike up to the 112.80 area in the aftermath is not obviously explained by them. It may be that markets are a little more thinly traded than they might otherwise be after a week of widespread regional holidays and before Friday’s US nonfarm payroll release.

Earnings are a crucial overall inflation component and, with Japanese inflation expectations low and anchored, they are one part of the pricing mosaic which the Bank of Japan has struggled to change. The country’s Consumer Price Index has shown long-absent signs of life this year. After eight straight months of gains it rose at a 0.7% annualized rate in August. That was a two-year high but also- and inescapably- well below the BoJ’s 2% target after many years and many trillion Yen in stimulus measures. 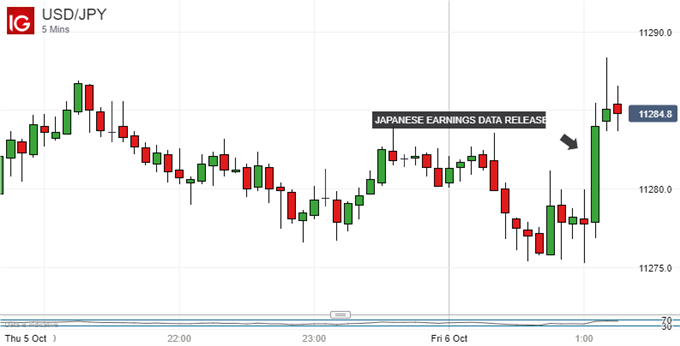 The Japanese Yen has been under broad pressure against the US Dollar since early September as markets have moved to price in further, gradual monetary tightening from the US Federal Reserve. The contrast between this prognosis and that for the Bank of Japan, which still has the stimulus taps wide open, has favoured the greenback and will probably continue to do so even as the current USD/JPY rally appears to be losing some steam. 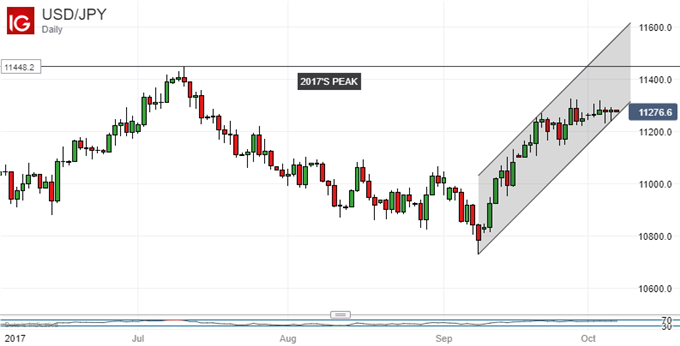