The Australian Dollar took a knock Friday following a Wall Street Journal report in which Reserve Bank of Australia board member Ian Harper refused to rule out an interest rate cut.

In the wake of some flimsy retail sales figures this week Mr. Harper reportedly said that, while there was no immediate cause for alarm, a response through interest rates could be warranted should consumption across the economy lose momentum. He also worried that slow wage growth was feeding through into weaker household consumption, but this is an old fear of the central bank’s.

Australia’s key Official Cash Rate remains at its 1.50% record low and market pricing suggests that the next move will probably be a rise, if not until well into 2018. RBA commentators have previously endorsed this pricing as just about correct, and Governor Philip Lowe has been at pains to suggest that he does not want to stoke already rampant consumer borrowing with still-lower rates.

However, Harper’s remarks had the Overnight Index Swap market moving to price the small chance of a rate cut from November onward, where no chance at all had been priced before. 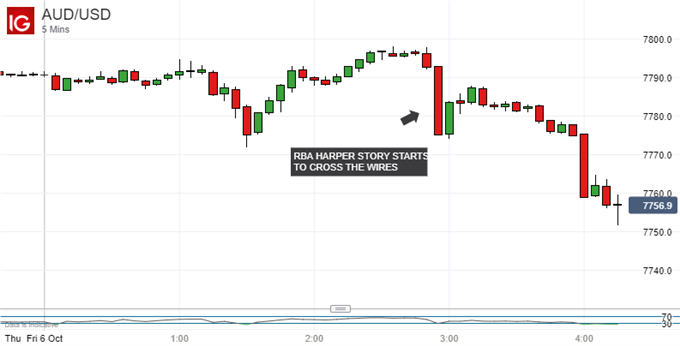 It’s worth pointing out that few central bankers ever ‘rule out’ interest rate moves of any sort, and that Mr. Harper was only stating what should be fairly obvious. That said it has been some time since any RBA official mentioned interest-rate cuts as a serious possibility at all and, even if this is just a rather subtle attempt to get AUD/USD to lose some more altitude, it merits attention.

On its daily chart the currency pair remains in its downtrend from 2017’s September peaks, even if the Australian Dollar is starting to look a little oversold. 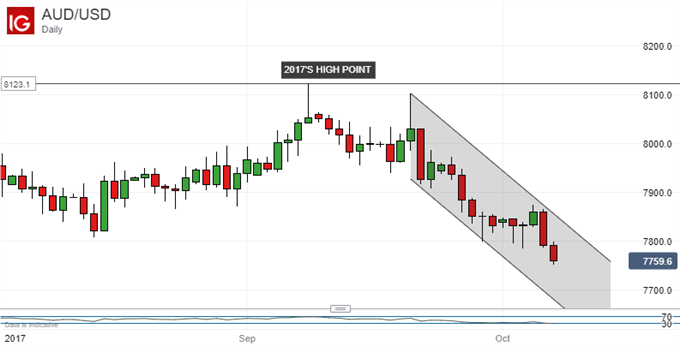