Australian Dollar Drops After Another Verbal Jab from the RBA

Have a question about why the Australian Dollar did what it did? Join a Q&A webinar and ask it live!

The Australian Dollar fell, presumably matching the RBA’s wishes, after the central bank left its target Cash Rate on hold at 1.50 percent. This wasn’t much of a surprise as no one was expecting Governor Philip Lowe to change course. However, the currency’s depreciation almost certainly have stemmed from something eye-catching in the statement accompanying the announcement.

A few changes to that document were since September. Most notably, the central bank said that a higher exchange rate is expected to contribute to continued subdued price pressures in the economy. As for the labor market, policymakers expect the unemployment rate to decline only gradually over the next couple of years.

Referencing house prices, the RBA mentioned that conditions in Sydney have been showing further signs of easing. In addition, growth in borrowing by investors has slowed a little recently. As per usual, the central bank judged that leaving the stance of monetary policy unchanged would be consistent with sustainable growth and achieving the inflation target over time.

The RBA has previously stressed that its next policy change – a distant prospect judging by today’s rhetoric – is likely to be a rate hike. The markets seem to agree, but the probability of an increase as priced into overnight index swaps does not reflect better-than-even odds until July of next year. 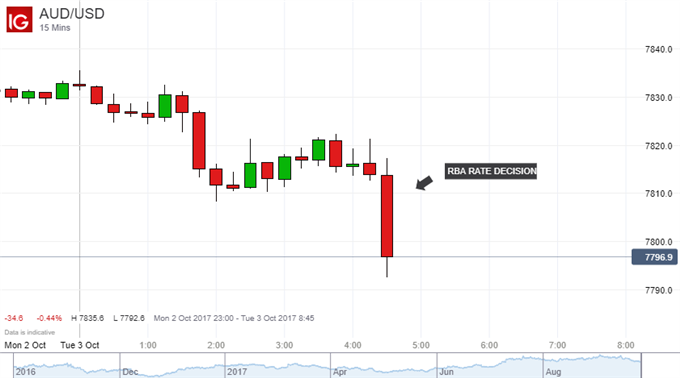