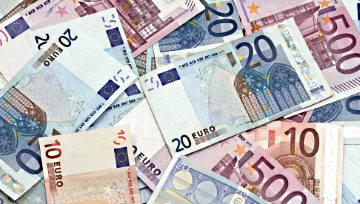 - In the UK, final second-quarter economic growth numbers included a downward revision to 1.5% in GDP expansion year/year from the previous estimate of 1.7%, sending the Pound lower.

EUR/USD was stable in Europe Friday after a mixed batch of economic data that leaves unchanged expectations that the European Central Bank will discuss a tightening of monetary policy later this year ahead of an actual move early in 2018 – although it might now be a tad more cautious.

Inflation was estimated at 1.5% year/year in September, unchanged from August but a little below the 1.6% predicted by economists in a survey. By contrast, the core rate edged up to 1.3% from the previous 1.2% whereas an unchanged number had been forecast. Earlier, August retail sales data from Germany showed an unexpected drop month/month, leaving the year/year number lower than had been forecast. The unemployment picture, however, was healthier in September than economists had predicted, with the unemployment rate at its lowest since German reunification in 1990.

In response, EUR/USD edged upwards but then came off the day’s highs.

In the UK, the data painted a picture of a rather weaker economy than had been expected, although the Bank of England still seems on course to raise interest rates. Governor Mark Carney said in a BBC interview that indications are that the UK economy is on track for rates to increase in the relatively near future although rate rises, if and when they come, will be limited and gradual.

The actual figures showed that UK GDP growth in the second-quarter was unchanged at the previously estimated 0.3% but that growth year/year had been revised down to 1.5% from the prior estimate of 1.7%. That sent the Pound lower against both the Euro and the US Dollar.

UK economic growth in the second quarter was the weakest year/year since 2013 and the UK’s dominant services sector contracted in July, showing a possible loss of momentum as the BoE prepares to raise interest rates for the first time in a decade.