New Zealand Dollar On Tenterhooks As Election Looms At Last

What does the retail trading world make of the currencies you like, and those you’re not so sure about? Find out at the DailyFX Sentiment Page

The New Zealand Dollar has been among the weaker developed-market performers in the past month, thanks at least in some part to neck-and-neck polling for the county’s general election.

That investors don’t care for uncertainty may be the markets’ hoariest old cliché but it’s no less true for that. However, they’ll be put out of their misery on Sunday so far as New Zealand is concerned. The country heads for the voting booths on Saturday.

At present, it looks as though neither the ruling National Party nor principle opposition Labour will secure an outright majority. Under NZ’s proportional representation rules, some sort of coalition is all-but certain. The National Party currently governs in minority with legislative support from the smaller ACT, Maori and United Future parties. One key source of uncertainty for markets in a coalition-building situation is the level of influence which might be gained by the nationalist New Zealand First party.

Kiwi-dollar bulls would it seems prefer a result which looks something like the status quo, as can be inferred by NZD/USD’s rise to six-week highs Thursday following a poll which put the National Party ahead. 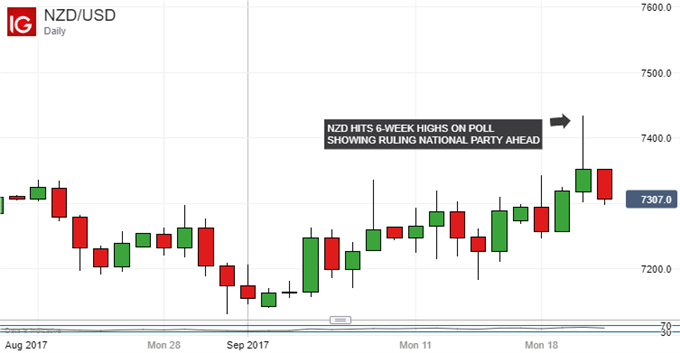 Still, despite election uncertainties the kiwi remains quite close to its 2017 peak against the US Dollar- July 27’s 0.7558. Indeed, it may just be in the process of breaking out from a downward channel in place since then. Given such clear underlying demand it’s far from clear that the currency has far to fall whoever emerges victorious. However, the Labour party stands as the unknown quantity for markets so expect some rise in risk aversion should the election go its way, even if it’s only short term.

The Reserve Bank of New Zealand has arguably been even more forthright than that of Australia in worrying about the effects of currency strength. That said both seem to have toned down the rhetoric in recent weeks. This may be in recognition of the fact that much of their dollars’ fate is governed by events in the US version and therefore beyond their control. In the New Zealand Dollar’s case, the looming election may have induced the central bank to keep commentary to a minimum.