Just getting started in the Japanese Yen trading world? Our beginners’ guide is here for you

The Japanese Yen is weaker against the US Dollar as a new week gets under way, possibly thanks to widespread reports that Japanese Prime Minister Shinzo Abe is mulling an early election.

Abe’s battered approval ratings have bounced back to near 50% in some polls and local media have quoted government and ruling party sources as saying this might be enough to see him go to the country. Abe governs in a collation of his Liberal Democratic Party and junior partner Komeito. He is reported as having told representatives of both that he might dissolve parliament following the convening of the legislature on September 28.

Reuters reports that one option might be to hold a snap election on October 22, when three by-elections are scheduled currently. Others might be later in October or in early November, after an expected visit by US President Donald Trump. Political sources reportedly told the wire service that Abe will make the call when he gets back from a US visit on September 22.

Abe is under no constitutional obligation to hold an election until late next year, and he may decide that he doesn’t want to add to instability in a region already plagued by North Korea’s defiance of the international community.

Still, the Yen seems to have taken a slide on this heightened political uncertainty, with USD/JPY nosing up in to the 111.00 handle. Japanese markets will be thinned or closed Monday for a national holiday, so it’s probably worth keeping in mind that any moves could snap back in short order Tuesday. 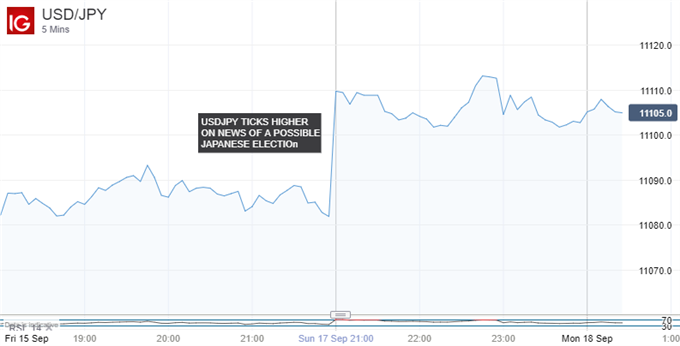 More broadly, USD/JPY looks more bullish than it has for some time. The pair has broken the long downtrend in place since it marked its 2017 peak, back on July 11. It seems quite comfortable above that trend line and may be building a new, higher base with support around last week’s lows of 109.25.

However, much of this newfound strength was rooted in the burst of risk appetite which started last week’s trading. That may not amount to a very permanent foundation and the uncommitted may want to wait and see whether this new, higher range base does in fact form.