We’ve analysed millions of real-world trades in an effort to unearth the Traits of Successful Traders.

The Australian Dollar got a boost Wednesday on news that Australian consumers were much more cheerful this month.

September’s consumer sentiment index from major lender Westpac and the Melbourne Institute rose by 2.5% on the month, more than erasing the bitter memory of August’s 1.6% fall. The index itself now stands at 97.9, above its prior 95.5.

Although policy markets are likely to welcome the consumer’s evident vigor, there may be the odd caveat, especially if much of current spending turns out to be debt funded. The Reserve Bank of Australia has repeatedly referred to household debt levels as a worry and signs that they are getting worse won’t be welcome.

Australian Dollar bulls certainly welcomed the data, pushing AUD/USD further above the 0.8000 handle. The pair looks increasingly comfortable above this level, a point which once formed fearsome psychological resistance. 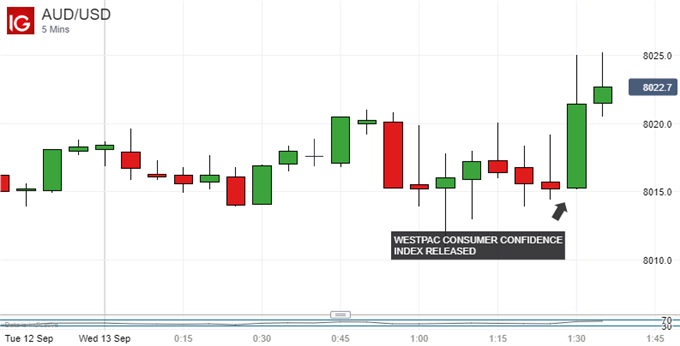 The currency is usually a beneficiary of risk-appetite revivals such as that seen this week. However, AUD/USD was already at peaks not seen since early 2015 before it began, and has retreated a little since as the greenback makes broad gains. That said the cross remains clearly elevated, and supported near its highs. This is sure to trouble the RBA which has made no secret of its desire for a lower exchange rate. 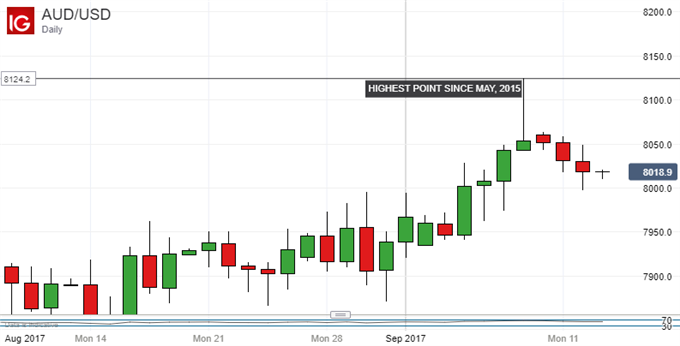 However, there has been no recent sharpening of rhetoric out of Canberra and, while markets are watchful, it would seem that the central bank has opted not to fight too hard, at least not yet.

The next domestic economic numbers from Australia are biggies; official labor statistics. They are coming up on Thursday. Job creation is expected to remain pretty strong, and to notch up an eleventh straight month of gains. The unemployment rate is expected to remain a low 5.6%. The developed market conundrum of high employment and low wage growth applies to Australia, however, and even strong numbers may not do much for interest-rate expectations.

The record-low, 1.5% Official Cash Rate is expected to stay as it is until well into 2018 according to rate- futures markets.