Just getting started in the AUD/USD trading world? The DailyFX beginners’ guide is all yours.

The Australian Dollar slipped a little Tuesday after the Reserve Bank of Australia again fretted its strength.

The RBA left its Official Cash Rate on hold at a record low of 1.5%, as it had been universally expected to do. It is still worried about the sustainability of growth and, above all, about Australian consumers’ enormous debt levels. It judged that unchanged rates were consistent with its growth and inflation targets.

However, it also took the chance to say that the Australian Dollar’s elevated exchange rate was likely to weigh on inflation, but also on job creation and economic growth. This is nothing new. The RBA has been worried about the Aussie’s altitude since it rose to more than two-year highs this year. Some of that strength is of course no more than a function of US Dollar weakness, as the central bank again admitted.

All up the RBA’s statement changed very little for the currency whose fall seems to have been arrested already, mere minutes after the release. Markets remain of the view that the next OCR move will be an increase, but that there is little chance of that before well into next year. 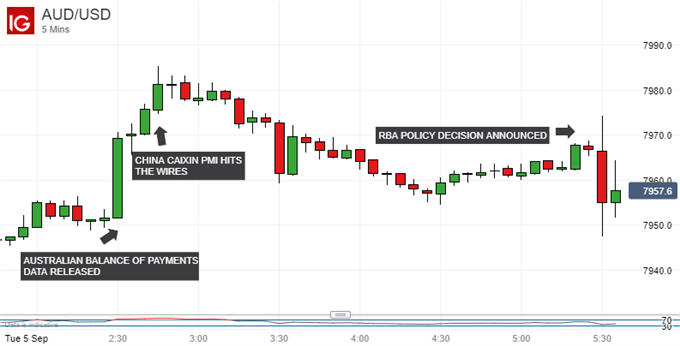 The Australian Dollar got a lift earlier after its home nation’s second-quarter balance of payments data raised hopes that Thursday’s official Gross Domestic Product release might come in better than had been feared. The current account deficit ballooned way beyond expectations, but investors chose instead to focus on exports’ share of GDP growth. That rose to 0.3%, having deducted 0.7 percentage points from the first-quarter’s figure.

More broadly AUD/USD has traded a particularly narrow range through August and into September as RBA rhetoric about currency strength has seemed to keep a lid on the cross. However, it is now inching toward the top of that range and Wednesday’s GDP release will now be key. Strength is likely to pose a fresh challenge for the central bank and see a wave of fresh demand for the currency. Weakness on the other hand will probably see the established range trade grind on. 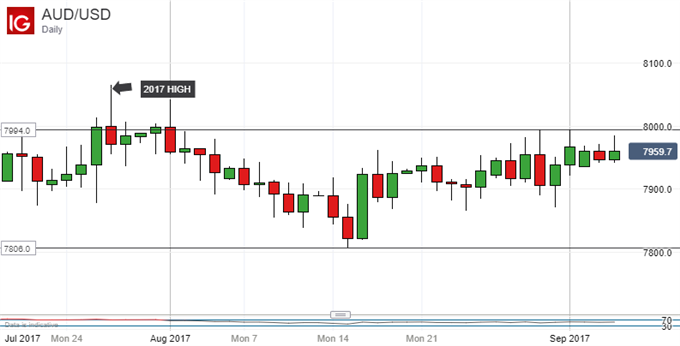