US Dollar Pops on Strong Inflation and 3% 2Q GDP

- The Personal Consumption Expenditure Index (PCE) beat expectations at 3.3% vs 3.0% estimated; core fell in line with projections at 0.9%.

- The US economy grew by 3% according to gross domestic product; this surpasses first quarter GDP at 2.6%

Consumption in the second quarter beat analysts’ estimates as the Personal Consumption Expenditure Index (PCE) came in higher over the expected figure. PCE q/q came in at 3.3% versus 2.8% in the previous quarter. However, the core PCE was less notable as it came in line with projections at 0.9%. Within the index, durable goods saw a slight dip at 0.65% q/q and nondurable goods rose slightly at 0.62% q/q.

The PCE index is a comprehensive measure of how much consumers spend each month, counting expenditures on durable goods, consumer products, and services. It is the Fed’s primary gague for inflation. The PCE figure is released in headlines as a percent change from the previous month. Volatile items like food and energy can fluctuate widely due to seasonal and non-systemic factors. In order to provide a less erratic picture of Personal Consumption, food and energy items are excluded in the PCE core report.

While the US Dollar has benefitted from this morning’s data, this doesn’t necessarily translate into a rate hike. According to CME’s FedWatch Tool, the chance of seeing another rate hike in 2017 stands at 41% at the December Federal Open Market Committee meeting. This may come as a dissappointment to markets looking for a third hike this year. 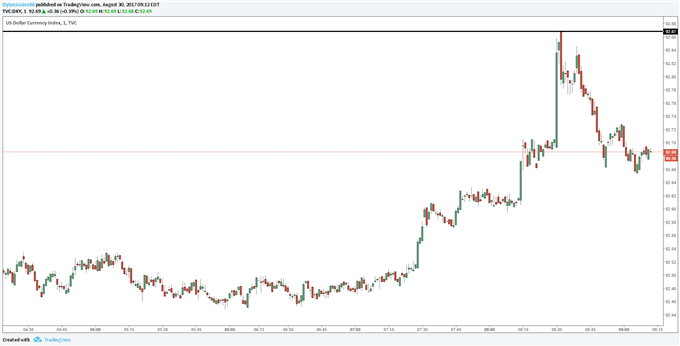 Immediately following the data, the US Dollar Index jumped to 92.87 hitting the highest level since August 25. However, a few moments after the dollar came off of that high and settled around 92.69 at the time of this article.