- Launch an ‘unprecedented, grave and serious threat’ according to Japanese PM Shinzo Abe.

- EURUSD rallies back to levels last seen in December 2014.

North Korea fired a ballistic missile over Japan Tuesday, in the latest show of defiance by Pyongyang, prompting investors to dump the US Dollar and flee into safe haven assets. The test, described as an ‘unprecedented, grave and serious threat’ by Japanese Prime Minister Shinzo Abe, pushed gold above $1325/oz and back to its highest level since November 2016. The precious metal is now within $50 of levels last seen at the start of March 2014, although continued follow through is not a certainty.

Do you trade Gold and want to know what makes a successful trader? – Find out with our free eBook here

US dollar weakness also contributed to the move higher in the precious metal as the US Dollar Index fell through the 91.93 support and made a fresh 15-month low of 91.37. The US dollar was also hit after Hurricane Harvey wreaked havoc across Texas and Louisiana, with flood damage causing tens of billions of dollars of damage, potentially dampening US 3Q GDP. EUR/USD traded above the psychological 1.2000 level and back at levels not seen since December 2014.

The risk-off move also sent buyers rushing into other traditional safe havens including CHF and JPY, while all global stock markets registered losses with the DAX 30 losing in excess of 2% as EUR strength took its toll on German exporters.

The latest move higher in gold will be good news for retail traders with the latest IG Client Sentiment indicator showing that 64.4% of traders are net-long of the precious metal, the highest percentage net-long since August 17 when gold traded around $1288/oz.

However, we typically take a contrarian view to crowd sentiment, and the fact traders are net-long suggests spot gold prices may continue to fall. Traders are further net-long than yesterday and last week, and the combination of current sentiment and recent changes gives us a stronger Spot Gold-bearish contrarian trading bias. 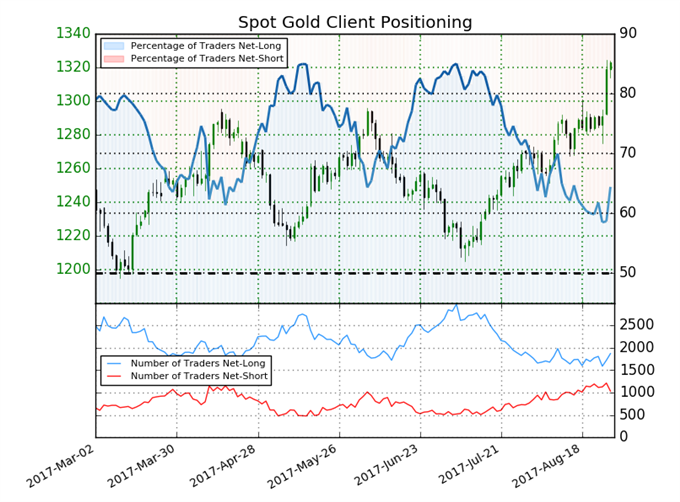