See how the Australian Dollar is viewed by the trading community at the DailyFX Sentiment Page.

The Australian Dollar initially fell against its major peers as RBA’s Governor Philip Lowe presented a speech. The central bank head stated that the board has been prepared to be patient on the economy, likely hinting that an interest rate adjustment won’t be due for some time yet. Mr. Lowe added that he prefers a prudent approach.

Philip Lowe reiterated their status quo that the current cash rate of 1.5 percent is supporting jobs growth and a return to average inflation. Once again, the Governor expressed his concern about Aussie Dollar strength noting that further AUD gains would slow an inflation and employment pickup.

Then came the Q&A session where he mentioned that market pricing on interest rate moves look reasonable. These predictions place in a better-than-even chance of an RBA rate hike by the August 2018 monetary policy announcement. While Governor Lowe said that a rate move is some time away, he added that it would likely be an increase.

Just as the markets were settling into what initially appeared as relatively dovish rhetoric, the Australian Dollar quickly retraced its steps and found itself appreciating against its counterparts. What’s interesting is that just yesterday the Reserve Bank of New Zealand also outlined that their next rate move will likely be up. The RBA has now joined in on this relatively hawkish playing field.

With that in mind, the RBA is still in no hurry to raise rates. As Senior Currency Strategist Ilya Spivak mentioned, the Aussie still appears as attractive for yield-seeking investors. 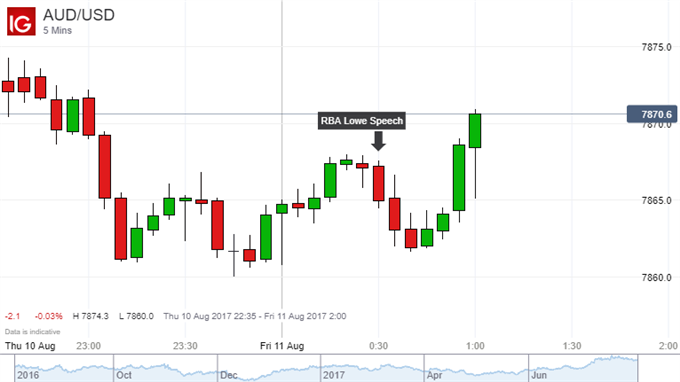