Ethereum Doubles in Price From July’s Low; More to Come?

- Ethereum has more than doubled in less than a month after slumping on flash-crash worries and Bitcoin fork fears.

- There’s still plenty of upside room before ETH’s all-time high is reached but will the latest rally need a breather first?

The recent slump in the value of Ethereum, from an all-time high of $412 on June 12 to its recent nadir of $136 on July 16, has seemingly been consigned to the past as the digital token continues to rebound, more than doubling to a current level of $304. But will the market need to take a breather, or will it need a fresh bout of good news, before the token takes another run at its all-time peak?

After the ‘flash crash’ of June 21 when ETH got slammed from $317 to touch a ‘spike low’ of just $0.10 before rebounding straight back, confidence in the second-largest digital token by market capitalization evaporated. Ethereum fell back to a multi-week low of $136, aided in part by concerns about a fork in the blockchain ecosystems and worries that the rush of ICOs, priced mainly in Bitcoin and Ethereum, had run its course. Faith however was soon restored in Ethereum’s functionality and long-term prospects, with many seeing it as the main long-term contender to Bitcoin. And when the blockchain hard fork went through without any problems, ETH, along with the rest of the cryptocurrency space, got another boost higher.

And looking at the chart above, a spinning-top doji formed on Wednesday and may cause the latest rally to stall. A spinning-top Doji signals weakness in the current trend, as buyers and sellers equal each other causing market indecision, but it does not normally signal a trend reversal. The current price around $305 is also just on the 61.8% Fibonacci retracement of the June 12 – July 16 high/low move and if ETH closes above this level ($305.58) it may provide a level of support before a potential move higher to the 0.786% retracement level of $353. 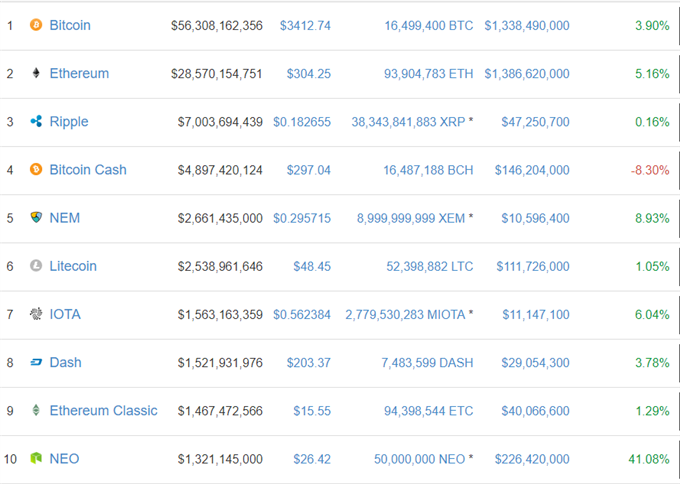 If you are interested in trading cryptocurrencies and would like to practice trading either BTC or ETH, you can create a Quick and Free Demo Account Here