Bitcoin extending losses over 4% during morning Friday APAC trade, now down over 20% since topping earlier this month.

See how retail traders are positioning in the Dollar-based majors, US indices,goldandoilintraday using the DailyFX speculative positioning dataon the sentiment page.

The US Dollar extended its decline through Tuesday’s session on news the International Monetary Fund (IMF) reduced its outlook for the United States’ economy because of policy uncertainty. The IMF cut its 2017 growth forecast to 2.1 percent from the 2.3 percent outlook offered in April, and cut the 2018 outlook to 2.1 percent from the previous 2.5 percent projection.

Plans to cut taxes and boost infrastructure spending have been a main focus for US President Donald Trump, and the execution of these plans highly anticipated by many. However, the IMF tempered its expectations that such economic and business friendly programs as regulations rollback, tax reform and a large infrastructure program, would readily clear legislative hurdles to be signed into law. That in turn, poses a concern for markets which have already moved to price such outcomes.

On a different tack, the IMF mentioned that it feels the gradual rate-hike path that the Federal Reserve has sustained is still appropriate, and recognized that US job growth has been persistently strong. It went on to call for the Fed to accept a modest, temporary inflation overshoot; and that it must continue to telegraph well laid out plans for the reduction of their balance sheet. 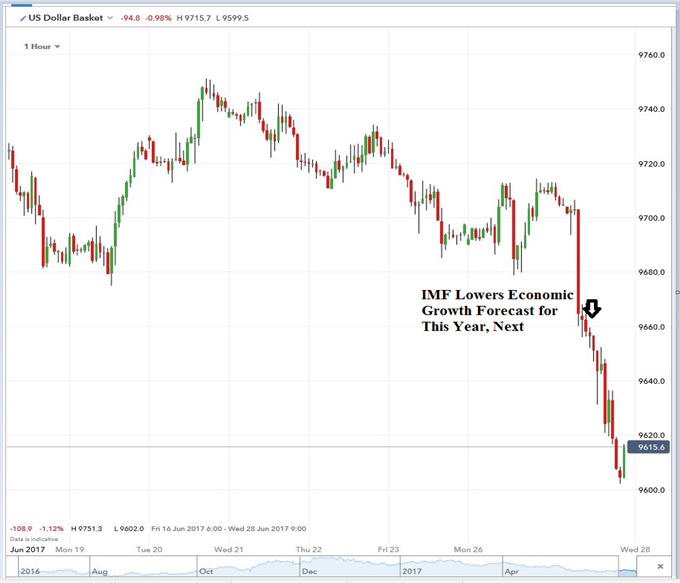