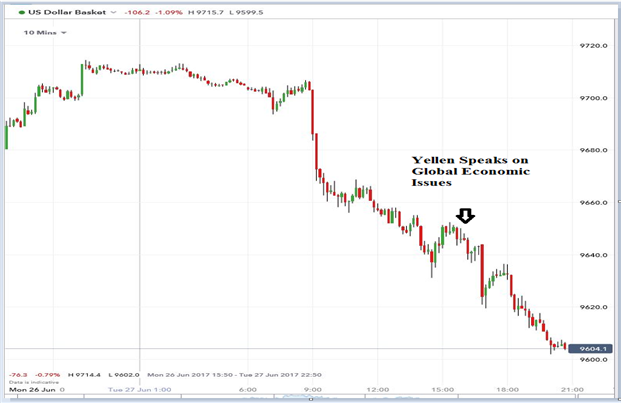 Get live coverage of economic data that moves the FX and capital markets at theDailyFX webinars page.

The US Dollar slid along with equities as Federal Reserve Chairwoman Janet Yellen made her first public remarks since the US central bank raised rates on June 14. While there was no clear indication from the Fed Yellen’s remarks that plans for tightening monetary policy had accelerated or decelerated, she did feel it necessary to mention that US asset valuations are somewhat ‘rich’ by traditional metrics. That was rare reference to prevailing market measures. A few years ago, she had noted that some select sectors were ‘frothy’ with a distinct market response that would eventually fade with time.

On a brighter note, Yellen also commented on the current strength of the US banking system. She pointed out that major banks’ capital is much stronger than previously measured and that overall the banking system is much safer and stronger. The Chairwoman went on to say that it is difficult to completely rule out another crises in the system, but seemed confident that we wouldn’t see the next extraordinary crisis in our lifetimes.

Finally, Yellen commented on her current stance on monetary policy, saying that the Fed has made their gradual rate-hike pace very clear, and that the central bank’s plans for reducing its $4.5 trillion balance sheet are ‘well understood’ by markets. This lack of fodder for speculating a deeper certainty or faster pace of tightening moving forward on US monetary policy may explain the Dollar’s slide following Yellen’s comments today. 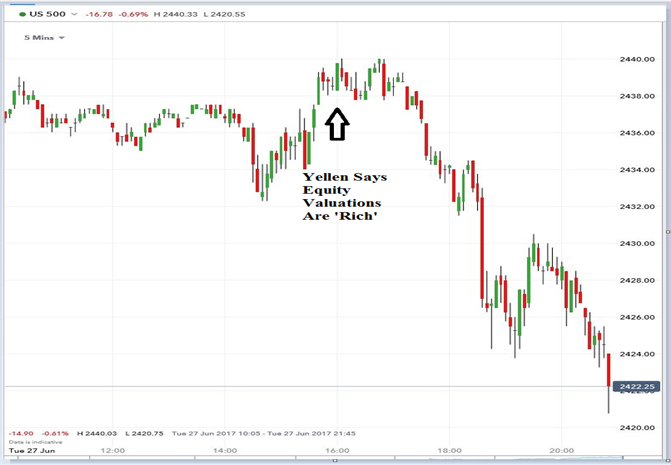