- Technically, the crude oil price is well placed to recover after breaking to the upside from a falling channel.

- Positioning data also suggest a rally after a long period of weakness.

The price of crude oil is well placed to rally, with technical signals and positioning data both pointing to a recovery despite continuing weak fundamentals.

As can be seen from the US crude chart below, the price has been falling within a downward sloping channel for more than a month and reached its lowest level since August 11, 2016 last Wednesday, just above $42 per barrel. Since then, however, it has been recovering gently and has just broken to the upside above the resistance line connecting the successively lower highs, helped by a weaker US Dollar.

While several more sessions are needed for confirmation of the breakout, that trendline could now provide support, with the May 4 low just under $44 the most obvious near-term target.

This analysis is supported by positioning data reported by Reuters market analyst John Kemp. He notes that hedge funds and other money managers appear to have abandoned all hope that OPEC will rebalance the over-supplied market, slashing formerly bullish bets on crude futures and options.

At DailyFX, we typically take a contrarian view to crowd sentiment, and the fact that fund managers are more bearish suggests to us that crude prices could rally. Moreover, the latest IG Client Sentiment data show retail traders are less net long than yesterday and less than they were last week. Recent changes in sentiment warn that the current price trend may soon reverse higher despite the fact traders remain net long. 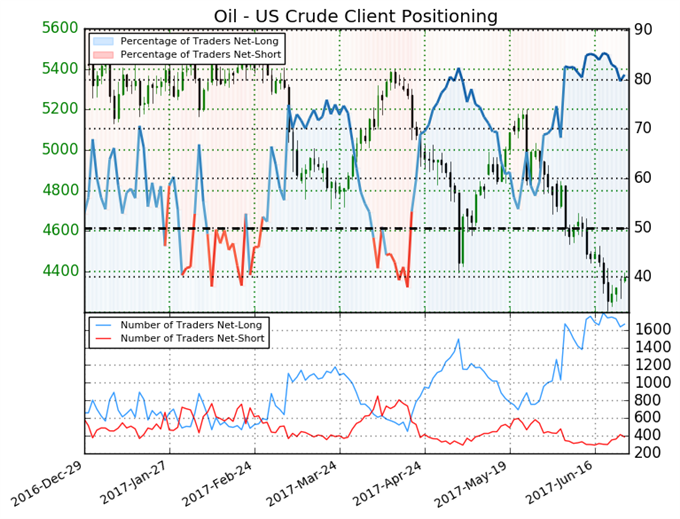