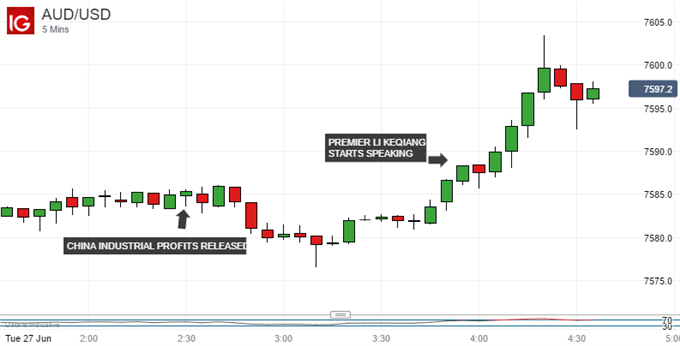 The Australian Dollar continued to firm up against its US rival Tuesday following a speech by the Chinse Premier Li Keqiang. Indeed AUD/USD popped back above the 0.76 level as he spoke.

Speaking in Dalian at the so-called “Summer Davos” – a regular meeting of the World Economic Forum – Li struck some upbeat notes. He said the country was “fully capable” of hitting 2017’s full-year growth target of 6.5% even though it faces “many challenges.” He also noted that domestic demand has become a key economic pillar, lessening reliance on the old, make-and-export model.

Li said that Beijing will work to improve local market access for overseas firms while continuing to cut domestic capacity in older industries like steelmaking. He said that while there were potential risks in the Chinese financial sector, the government can cope with them.

Li also promised ‘stable’ macroeconomic policy and ‘prudent’ monetary policy for China, saying that the country would not resort to “massive” stimulus.

However, he also fretted about the rising volume of what he reportedly called “anti-globalisation voices.” He noted that world political risks were on the rise and called the momentum of global economic recovery “insufficient.”

He went on to say that limiting trade freedom reduces economic fairness and that globalization offers opportunities to all.

In so far as his words echoed other comments made by China in support of the global trade from which its economy has hugely benefitted, there seemed to be little new here for investors. It’s therefore unlikely that they had much direct impact on the Australian Dollar. AUD/USD was already creeping upward through the Asia/Pacific session, supported earlier by news that Chinese industrial profits continued to rise strongly in May.

Li’s words come at a time of uncertainty as to what measures if any the US administration will take against countries which run persistent trade surpluses with the US. China heads that list. President Donald Trump has railed against these countries often enough, both on the campaign trail and in office. However, aside from overseeing US withdrawal from the Trans Pacific Partnership – which didn’t include China anyway – concrete action has been lacking.

This speech looks like another exhortation to the US to be circumspect in its trade policy, but it was also a defence of China’s own economic performance. However, Li did admit that it was now difficult for the country to maintain the high-speed, or even medium-speed, growth which has fuelled its speedy rise over the last twenty years.

Even if that 6.5% growth target is hit, it will be the weakest outcome for 27 years.