- The US purchasing managers’ indexes for June came in lower than expected, sending EUR/USD higher.

- They point to slower US economic growth in the months ahead.

- Check out the DailyFX Economic Calendar and see what live coverage of key event risk impacting FX markets is scheduled for next week on the DailyFX Webinar Calendar.

The Markit “flash” purchasing managers’ indexes for June came in weaker than economists had expected. The manufacturing PMI was 52.1, below the expected 52.9, and the PMI for the services sector was 53.0, below the forecast 53.9, putting the June composite PMI at 53.0.

These forward-looking indicators were all down from May but well above the 50 level that separates expansion from contraction, suggesting continuing but slower economic growth at the end of the second quarter. While they generally attract less attention than similar data from ISM, the Institute for Supply Management, they are worth watching for their timeliness; the ISM data not being released until early July.

There were also some bright spots in the latest numbers: both the services and the composite new business indexes were the highest since January, although the manufacturing PMI was the lowest since last September. Still, the weaker than predicted overall tone helped the Euro extend its earlier Friday gains against the US Dollar.

Commenting on the data, Chris Williamson, Chief Business Economist at IHS Markit, said: “The economy ended the second quarter on a softer note. The June PMI surveys showed some pay-back after a strong May, indicating the secondweakest expansion of business activity since last September.”

He continued: “The average expansion seen in the second quarter is down on that seen in the first three months of the year, indicating a slowing in the underlying pace of economic growth. While official GDP data are expected to turn higher in the second quarter after an especially weak start to the year… the relatively subdued PMI readings suggest there are some downside risks to the extent to which GDP will rebound.”

Historical comparisons of the PMI against GDP indicate that the PMI is running at a level broadly consistent with the economy growing at a 0.4% quarterly rate (1.5% annualized) in the second quarter, or just over 2% once allowance is made for residual seasonality in the official GDP data, according to IHS Markit.

“There are signs, however, that growth could pick up again: new orders showed the largest monthly rise since January, business optimism about the year ahead perked up and hiring remained encouragingly resilient. The survey is indicative of non-farm payroll growth of approximately 170,000,” said Williamson.

“Average prices charged for goods and services meanwhile showed one of the largest rises in the past two years, pointing to improved pricing power amid healthy demand,” he added. 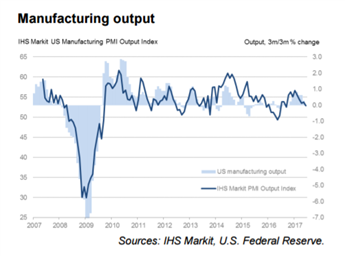