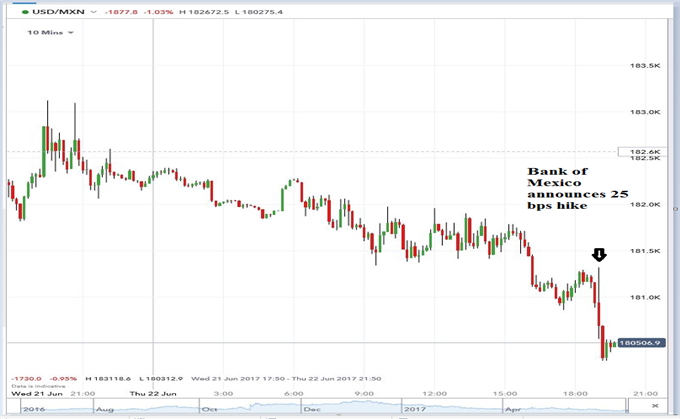 What’s driving currencies in the FX markets? Find out in ourtrading guides.

The Mexican Peso gained against its major counterparts as the Bank of Mexico extended its tightening cycle and raised the key interest rates for the seventh consecutive time. The decision to hike 25 bps (0.25 percent) to 7.00 percent was in-line with the tightening bias the central bank has carried forward from previous meetings. It also held consistent with higher inflation expectations from the monthly survey taken by the Bank of Mexico. In today’s statement, the central bank said it expects Mexico’s CPI to reach its maximum range tolerance in coming months, and to finally reach its target around 4Q 2018. It is also worth noting that the central bank stated that they expect policy decisions to keep affecting CPI in coming quarters.

This decision is also in-line with the 25 bps rate hike from the US Federal Reserve last week. Mexico’s policy authority closely monitors the actions of its counterpart to the north. In today’s statement it was said that Banxico will continue to assess the relative monetary position between Mexico and the United States, and take into account the transitory nature of the shocks that impacted their inflation figures. However, the main focus for the Bank of Mexico today seemed to be the desire to strengthen the anchoring of inflation expectations, and that with the contribution of monetary policy, Mexico will hit its set inflation target.