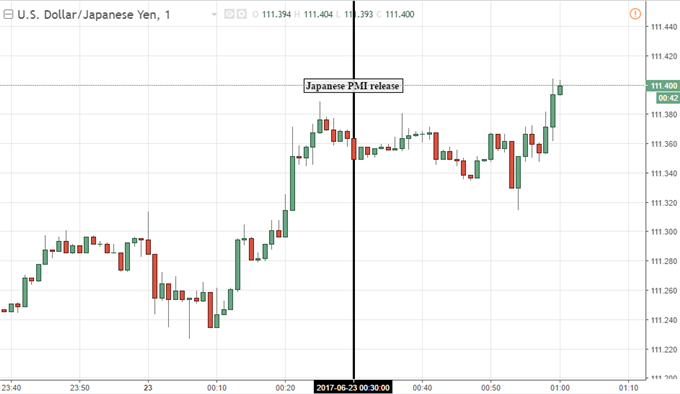 The Japanese Yen was little changed following a downshift in the country’s manufacturing PMI from 53.1 to June’s 52.0 reading – a throttled pace of expansion through the end of the second quarter. Despite the implications this carries for the world’s third largest economy and the Bank of Japan’s already-depressed monetary policy bearings, the currency proved resilient to the fresh data. In similar fashion, the balanced sentiment carried over to the bond and equity markets

According to the Nikkei’s manufacturing survey, this month has marked the tenth consecutive period of expansion for the manufacturing sector – any reading above 50.0 indicates expansion for the sector. Looking into the report component statistics; new orders, employment and output all increased but at a similarly slower rate. Despite the overall tenth consecutive month of growth for the sector, it was nevertheless the slowest pace in seven months.

Putting this indicator into context, Japan’s economy through the first quarter of the year expanded by 0.3 percent. While that is a tepid pace – in fact the same clip for three straight quarters – it extends a notable period of expansion. In fact, with last quarter’s growth, the country tallied its longest period of expansion in a decade. Weak domestic consumption has raised the need for exports output to provide lasting growth. That has proven a difficulty with the rise of competitive political and trade policy to replace the popular monetary policy efforts depended upon just a few years prior.