- Both fundamentally and technically, the price of US crude oil is under increasing pressure.

- The selloff is becoming aggressive amid a global supply glut.

- That’s beginning to affect both stocks and the commodity currencies too.

- Here are two upcoming webinars you might want to check out: Key UK Events and Markets for the Week Ahead with Nicholas Cawley and Live Data Coverage: Eurozone PMIswith me, Martin Essex.

The US crude oil price has been falling sharply in recent weeks and both technically and fundamentally there are good reasons to think that even sharper falls could be on the way in the next few days – affecting both stock markets and the currencies of oil-producing countries too.

Behind the oil-price weakness lies what most people in the industry see as a global supply glut as both members and non-members of OPEC – the Organization of the Petroleum Exporting Countries – continue to pump more oil than is needed, with still more oil coming from US shale producers. OPEC, once seen as a price-setting cartel, has seemed unable to respond.

Libya, Iran and Nigeria, which were excluded from an OPEC agreement to slash production last year by more than a million barrels a day, have all increased their output, inventories are high and there have been many reports of tankers with surplus oil in them being “parked” at sea.

In a sign of how poor sentiment is currently in the market, the price barely responded Wednesday to data from the US Energy Information Administration showing that domestic crude supplies fell by 2.5 million barrels in the week ended June 16. Analysts surveyed by S&P Global Platts expected a decline of 2 million barrels, while the American Petroleum Institute late Tuesday reported a fall of 2.7 million barrels.

In addition, there have been reports of falling Chinese demand for the commodity, while this week’s decision by the king of Saudi Arabia to change his successor has added an element of political risk to the market. Technically, too, the market looks weak.

From its January 4 high of $55.63 per barrel, the price has now fallen by 23.1% to the current $42.79 – meeting one definition of a bear market, which is a drop of more than 20%. It is now at its lowest since August last year and, as the chart above shows, has broken through the floor of a one-month falling channel.

That suggests even faster falls to come and has led to much speculation about $40 now being a possible target. At that level, though, dip buyers would likely emerge, while US shale producers would probably consider cutting output.

In the markets more generally, the price of oil is becoming a key driver, hitting the prices of oil-company stocks and the currencies of oil-producing countries such as Canada and Norway. The FTSE 100 index of the largest London-listed stocks, many of them energy and mining companies, was falling on Thursday for the third successive session. The Canadian dollar is weakening against its US counterpart, which is recovering some of its recent sizeable losses against it. “Risk-off” sentiment is rising.

We typically take a contrarian view to crowd sentiment, and the fact traders are net-long suggests US crude prices may continue to fall. Positioning is less net-long than yesterday but more net-long from last week. 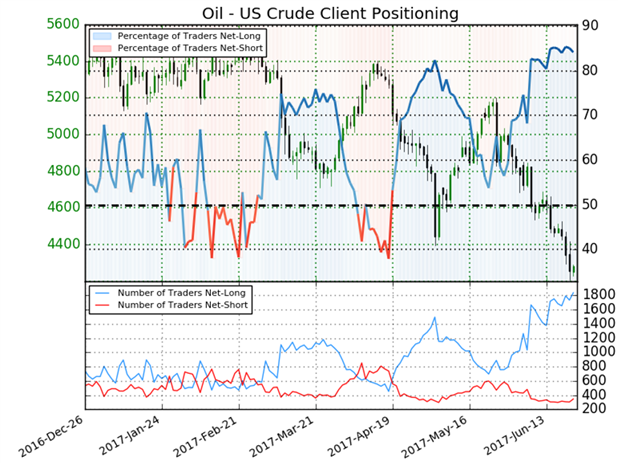 If you’re looking for trading ideas, check out our Trading Guides; they’re free and updated for the second quarter of 2017. And here’s where you can find the IG Client Sentiment Data