What do retail traders’ buy/sell decisions hint about the New Zealand Dollar trend? Find out here.

The New Zealand Dollar rallied against its major counterparts after the Reserve Bank of New Zealand interest rate announcement. Going into this decision, the markets were overwhelmingly expecting the central bank to hold rates unchanged. This was exactly what happened, the RBNZ maintained its official cash rate at 1.75%.

What mattered the most going forward would arguably end up being any future guidance that could affirm or cause speculators to reevaluate their bets of their interest rate outlooks. Overnight index swaps were pricing in at least a 50% probability of an RBNZ rate hike by April 2018, less than one year away. With the Kiwi’s rally after the press release, traders found a window to draw conclusions on a shift in rate forecast.

Diving into Governor Graeme Wheeler’s statement, much of what was stated in June was left unchanged from May. He mentioned that GDP growth in March was lower than expected, but the growth outlook remains positive. As for inflation, Wheeler said that the rise in prices in March were temporary and may lead to some variability in headline inflation.

The speculative foothold of this monetary policy announcement arguably ended up being what was left out rather. In May, the RBNZ said that “developments since the February monetary policy statement on balance are considered to be neutral for the stance of monetary policy.” This was notably absent in June’s document.

Investors and speculators alike likely interpreted the removal of a “neutral” stance as a relatively hawkish shift – though it does not explicitly indicate a shift towards a hawkish view. Nevertheless, local 2-year government bond yields rallied as the announcement crossed the wires. While there are no speeches from the central bank’s governor on the docket for the remainder of this week, perhaps a Q&A session in the future might find Wheeler under fire about their exact intentions. 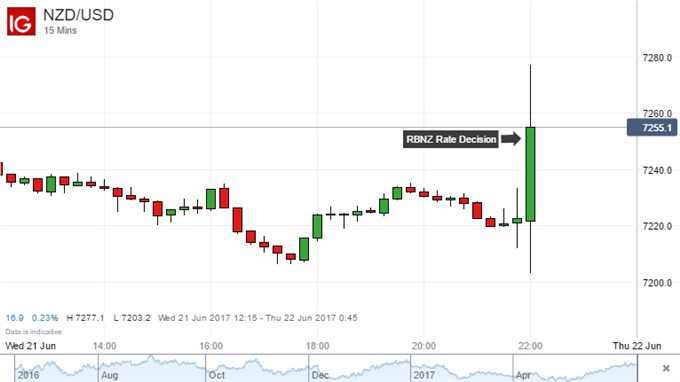 Retail FX traders have maintained a sharply skewed net short position after the event. Looking at the IG Client Sentiment data on DailyFX, we find that approximately 84 percent of those traders holding NZD/USD positions are short. That likely has as much to do with the technical implications as with the fundamentals surrounding New Zealand and US monetary policy. 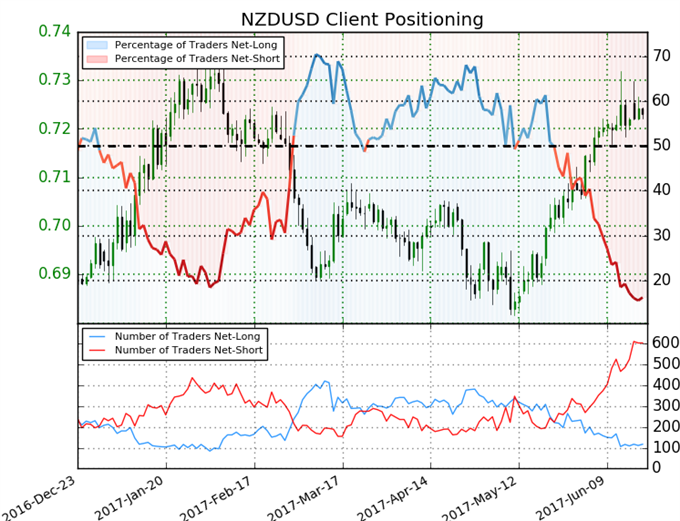