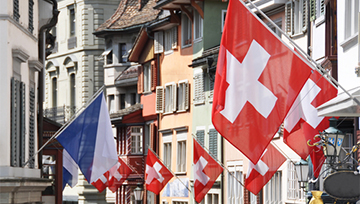 - The Swiss National Bank has left all its key interest rates unchanged, as expected.

- Both EUR/CHF and USD/CHF could now strengthen as other central banks withdraw monetary stimulus.

The Swiss National Bank left all its key interest rates unchanged Thursday, as widely forecast, and is not expected to raise them any time soon despite a gradual withdrawal of monetary stimulus by other major central banks. This could lead to a weakening of the Swiss Franc in the weeks ahead, with both EUR/CHF and USD/CHF benefiting.

The SNB left its interest rate on sight deposits at minus 0.75%, its three-month Libor target range at minus 0.25% to minus 1.25%, reiterated that it will remain active in the foreign exchange markets as necessary and repeated its view that the Swiss Franc is still significantly overvalued.

With many other central banks now less dovish, including the US Federal Reserve, which increased its key interest rate by a quarter of a percentage point Wednesday as widely predicted, this suggests limited upside for the Swiss Franc. Indeed, EUR/CHF stabilized in the wake of the SNB decision Thursday after earlier weakness.

In a statement, the SNB left its 2017 economic growth forecast unchanged at 1.5% and said its negative interest rates and its willingness to intervene are intended to make Swiss Franc investments less attractive, thereby easing upward pressure on the currency. It left its forecast for inflation in 2017 unchanged at 0.3% but edged down its forecasts for the two following years.