What do retail traders’ buy/sell decisions hint about the Australian Dollar trend?Find out here.

The Australian Dollar showed a muted response to June’s Reserve Bank of Australia monetary policy announcement. Heading into the event, the markets were not pricing in a rate adjustment. The same could also be said for the 12 month outlook. Thus, the key takeaway from this interest rate decision would have been the forward guidance.

The RBA reiterated that taking into account the available information, interest rates are where they need to be for sustainable growth in the economy and achieving the inflation target over time. They added that there are some signs that brisk housing growth is starting to ease. Not absent yet again from the details was that an appreciating Aussie Dollar would complicate the economic adjustment.

With a lack of clear cut bias for interest rate direction in the near-term, attention turns to events that may catch the eyes of board members. Australia’s first quarter GDP is due this Wednesday. The markets see on year growth slowing down to levels not seen since 2009. The central bank also noted that a slowdown is to be expected. Interestingly, a larger than expected current account deficit has increased the chance of a GDP growth miss recently.

Looking outside of the border, Chinese CPI and trade balance data are on the docket for Thursday and Friday respectfully. As Market Analyst David Cottle mentioned, the Australian Dollar remains vulnerable to the country’s largest trading partner. 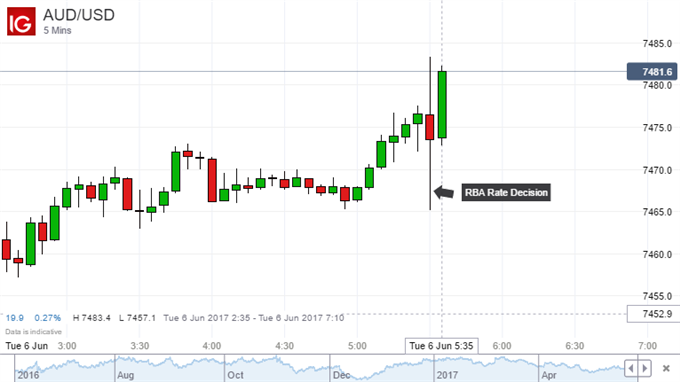