- A YouGov poll has put the ruling UK Conservative Party’s lead over Labour at just five percentage points, down from 20ppts only 11 days ago.

- Alongside Thursday’s news of downward revisions to UK Q1 GDP, the British Pound has fallen and could yet fall further.

- Check out the DailyFX Economic Calendar and see what live coverage of key event risk impacting FX markets is scheduled for next week on the DailyFX Webinar Calendar.

GBPUSD has again rejected the psychologically important 1.30 level and is weakening; a trend that will likely continue after Thursday’s downward revisions to UK Q1 GDP and Friday’s release of an opinion poll showing a huge drop in the lead the ruling Conservative Party has over Labour in the runup to the UK General Election on June 8.

The poll by YouGov, the first since the Manchester bombing, puts the Conservatives just five percentage points ahead of the opposition Labour Party, down from a 20ppts lead in two polls published only 11 days earlier. The center-right Conservatives are widely seen as more market-friendly than center-left Labour.

The poll follows revised data Thursday showing UK Q1 GDP grew by just 0.2% quarter/quarter and 2.0% year/year, both down a tenth of a percentage point from earlier flash estimates.

In response, GBP/USD has fallen and is now in a well-defined downward channel on the charts, suggesting more losses to come – particularly if further polls confirm the setback for Prime Minister Theresa May’s party. The pair is also now below the 20-, 50- and 100-day moving averages.

We typically take a contrarian view to crowd sentiment, and the fact traders are net-short suggests GBPUSD prices may continue to rise. Positioning is less net-short than yesterday but more net-short from last week. The combination of current sentiment and recent changes gives us a mixed GBPUSD trading bias. 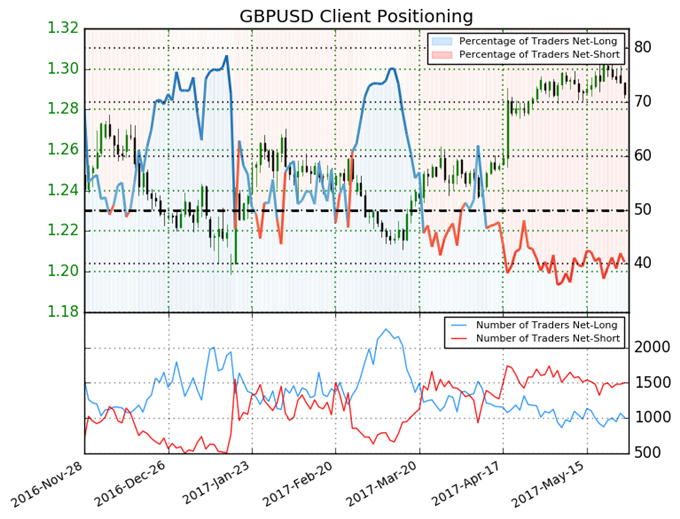 Elsewhere, the FTSE 250 index of mid-cap London-listed companies hit a new record high Friday, climbing above the 20,000 level for the first time.