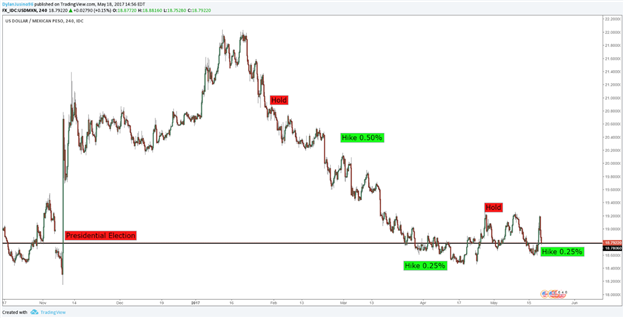 - Inflationary pressure poses a concern for the Central Bank.

- Monetary Policy continues to diverge between the Mexico and the US

The Central Bank of Mexico, “Banxico,” raised the benchmark overnight rate to 6.75% on Thursday despite expectations that the central bank would hold rates. Banxico reasoned that the hike was appropriate in order to “help inflation return to the target level.” Markets did not expect a hike given that markets expect the Fed to hike only once more in 2017.

Banxico stated that they expect the Consumer Price Index to overshoot their 3% target by the end of 2017. However, they do expect to reach their target by the end of the forecasting period. The Central Bank noted that the labor market no longer has slack. Butt that poses downside risks to inflation given that labor costs may rise. In all, Banxico remains optimistic seeing the global economy improving in 2017 and the coming year.

Banxico could be trying to overshoot their overnight rate just enough so that they can cut it back sometime in the near future given an environment of deteriorating economic conditions. The bank has raised rates by 1% in the last 4 months versus the Federal Reserve, which raised rated once by 0.25% in the same period. By staying attentive to the monetary policy relative to the U.S., they have taken a more hawkish stance. The two central banks are approaching diverging on monetary policy decisions given inflation in Mexico and employment in the US.

The chart above focuses on the reaction in MXN in the past five rate decisions. Currently USDMXN is trading around the pre-US election level of 18.792. As with previous hikes, MXN spiked on the decision and retraced afterwards. Overall, USDMXN has been channeling in May.