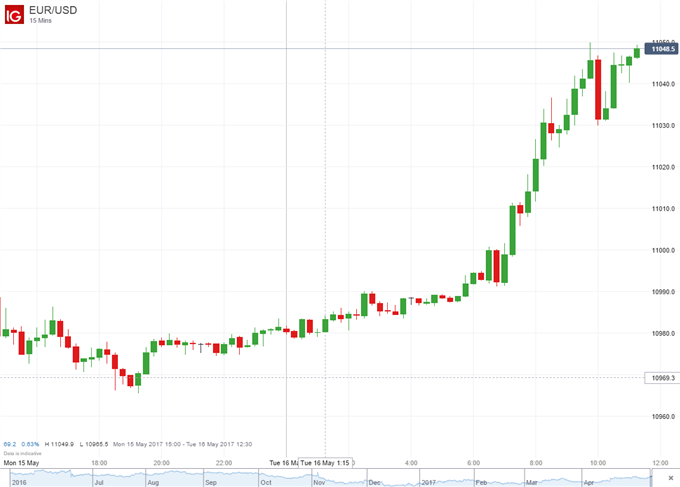 - Euro is strong across the board in Tuesday trade.

Would you like to know more about trading the financial markets? DailyFX’s trading guides should be your first stop.

The Euro has maintained its strength Tuesday as Euro-Zone GDP matches expectations and despite a below-par ZEW survey of economic sentiment in Germany.

Seasonally adjusted GDP in the Euro-Zone rose by 1.7% year-on-year after +1.8% in the previous quarter, according to a flash estimate published by Eurostat, the statistical office of the European Union, matching estimates.

GDP rose by 0.5% in the Euro-Zone the first quarter of 2017, compared with the previous quarter, again in line with forecasts and confirming that that the region’s recovery maintained a decent pace, and that growth is set to pick up further.

The ZEW survey came in at 20.6, missing estimates of 22, but it still suggests that annual GDP growth should be steady at about 2% over the next couple of quarters.

The single currency has been rebounding since the positive outcome of the French election. Meanwhile, a big win for Chancellor Angela Merkel’s conservative party in regional elections in Germany’s most populous state on Sunday suggests that Europe’s most powerful leader will do well in the national vote in September – a result which will again be favorable for the Euro in the long term.

The Euro is shining in Tuesday trading. The Dollar is slipping back against other major currencies as weaker US data dent rate-hike expectations and on the news today that President Donald Trump revealed highly classified information about so-called Islamic State to Russia's foreign minister.

The British Pound failed to be lifted by positive UK inflation data as the Bank of England seems firmly entrenched in wait-and-see mode despite firming price growth.

EURUSD is once again challenging the 1.1000 area post the GDP data release and trades at a six-month high of 1.1052, while EURGBP is nearing its highs from April. 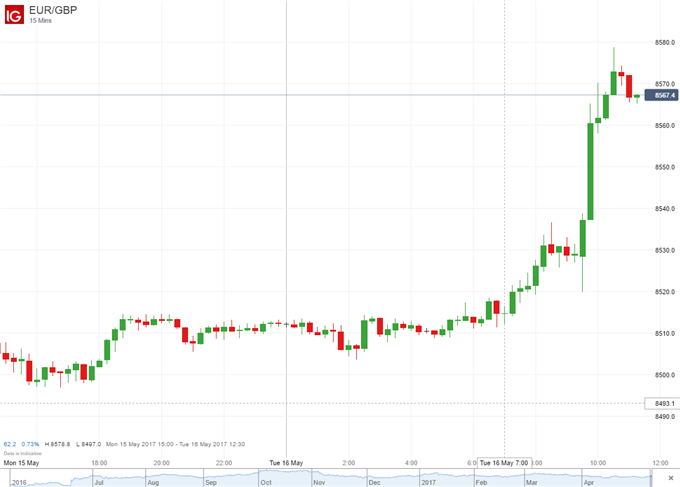