The Bank of England’s (BoE) Monetary Policy Committee (MPC) voted by a majority of 7-1 to leave monetary policy unchanged at today’s ‘Super Thursday’ meeting, as expected. Interest rates remain at 0.25%, UK government bond stock – gilts - at GBP435 billion and the total of corporate bonds at GBP10 billion. The Monetary Policy Committee, now eight members instead of nine after Charlotte Hogg resigned in March, voted by a majority of 7-1 compared to 8-1 at the previous meeting, to keep rates on hold and 8-0 to keep gilts and corporate bond totals unchanged.

The minutes of the latest meeting concluded,

“On the whole, the Committee judges that, if the economy follows a path broadly consistent with the May central projection, then monetary policy could need to be tightened by a somewhat greater extent over the forecast period than the very gently rising path implied by the market yield curve underlying the May projections.”

The latest Quarterly Inflation Report (QIR), a three-monthly update of the UK economy, showed the BoE cutting 2017 GDP to 1.9% from a prior 2%, while it also raised this year’s inflation expectations to 2.7% from a prior 2.4%.

Earlier in the session, the latest hard data showed the UK economy slowing down as fears over the upcoming Brexit talks continue to weigh on UK businesses. Manufacturing and industrial data for March both fell more than forecast, and the trade gap widened, confirming the recent weak Q1 UK GDP print of just 0.3%.

And GBP may have further to fall looking at current client positioning. 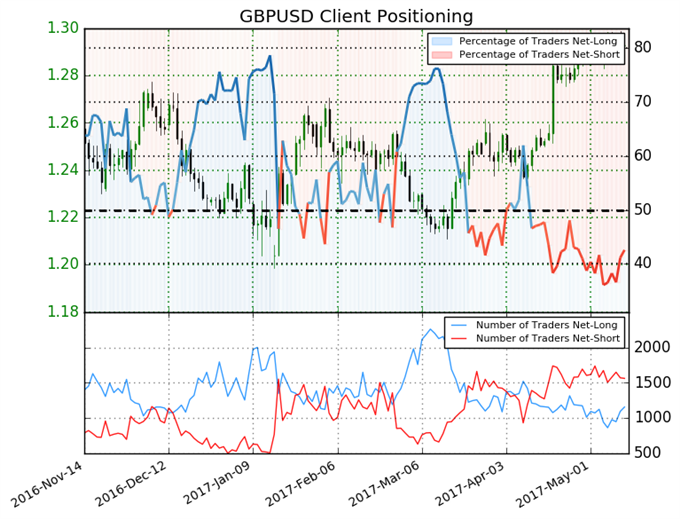