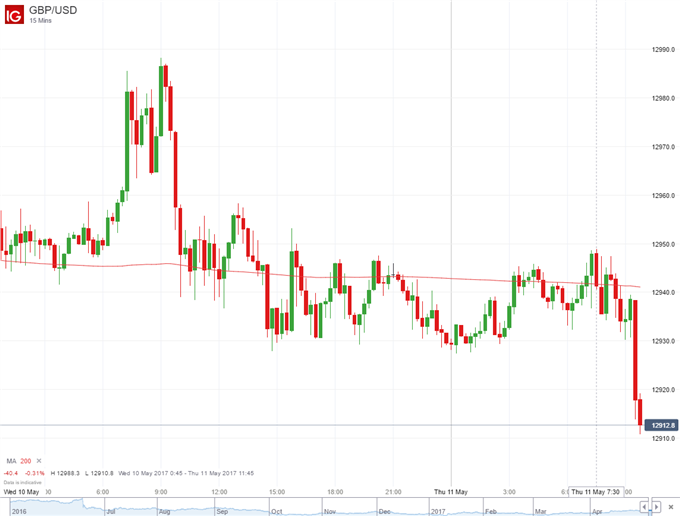 The British Pound dropped significantly after the release of a poor batch of UK data Thursday morning.

UK industrial production fell 0.5% on-month in March, according to the Office for National Statistics, more than estimates of -0.4%, but less than the 0.8% fall in February. Production rose 1.4% year-on-year in March, which was also worse than the 1.9% rise forecast.

The UK’s trade balance and construction output figures were also worse than expected. The trade deficit spiked to a six-month high of £13.44 billion in March as imports jumped. Construction output dipped 0.7% on-month (estimate: a rise of 0.3%), and rose 2.4% on-year, missing the expected 2.9% spike.

All in all, the data dampen any hopes that markedly slower GDP growth of 0.3% quarter-on-quarter in the first quarter could be revised up, and with it any hopes that the Bank of England may change tack on its accommodative monetary policy.

The Pound has dipped versus the Dollar on the weaker-than-expected data. Ahead of the data, GBPUSD was trapped in a near-term channel, with support at 1.2875 and resistance 1.3050. But it has fallen to 1.2912 on the news. Pound volatility will continue today. The main event for the Pound today is the Bank of England’s ‘Super Thursday’, featuring a rate decision, the minutes from the latest meeting of the rate-setting MPC committee, an updated quarterly Inflation Report and press conference with Governor Mark Carney.