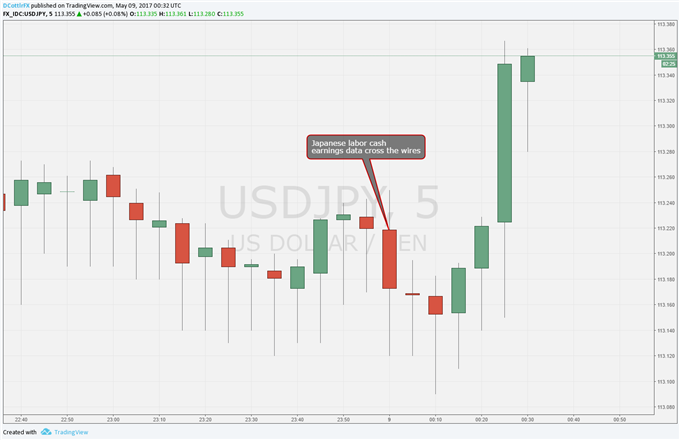 Would you like to know more about trading the Japanese Yen? DailyFX’s trading guide should be your first stop.

The Japanese Yen weakened a little further against an already stronger US Dollar Tuesday following news of further earnings weakness in Japan.

Labor cash earnings for March fell by 0.4% on the year, according to official data. That was well below both the expected 0.5% gain and February’s 0.4% rise. It was also the lowest point since June 2015. Total real cash earnings were miserable too. They fell by 0.8%, from a flat reading in February.

These numbers make any hopes which the Bank of Japan might have had for an upward boost to local inflation from wages seem very forlorn. The BoJ has urged businesses to pay more where they can, hoping to fuel consumer spending and moribund prices. But, as inflation expectations remain low, there is little incentive for firms to do so.

The numbers were released as BoJ Governor Haruhiko Kuroda told the Japanese Parliament that aggressive monetary easing was still necessary if the inflation target of 2% is to be hit. He proclaimed himself confident that it will be. The markets will take some convincing though. The last consumer price release showed a meager 0.2% annualized gain.

The Japanese Yen was already looking pretty defensive against the US Dollar, but it slipped a little further after the data and Mr. Kuroda. USD/JPY rose to 113.60, from 113.12 just before the figures. Wage and inflation weakness in Japan is now a rather ancient story.